What is at stake at the 70th World Health Assembly? 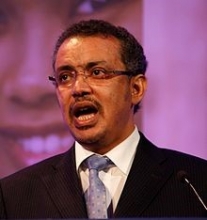 While, on the surface, it appears to be business as usual in the corridors of the premier organisation for health at the global level, tasked with setting global norms and standards and with co-ordinating affairs related to international health, nothing could be further from the truth.

The World Health Organization is set to elect a new Director General at the World Health Assembly (WHA) in May 2017, marking the completion of two four-year terms of the current Director General, Margaret Chan. Three candidates are now in the running -- Sania Nishtar from Pakistan, David Nabarro from the UK and Tedros Ghebreyesus from Ethiopia.

The WHO is beset with fundamental challenges that threaten the very foundations and founding principles of the organisation. WHO’s legitimacy in affairs related to international health stands compromised given its repeated failure to seek compliance with resolutions adopted at the annual WHA. Underpinning these deficiencies is the WHO’s funding crisis which does not allow the organisation to carry out its normative activities.

Clearly the new Director General will be confronted with an array of challenges, and this is the backdrop to the 70th WHA that commences on 22nd May 2017 in Geneva. Highlighted below are some of the key agenda items that will come up for discussion at the Assembly.

WHO faces a funding shortfall in the present biennium (around US $400m) and one of the scenarios being discussed is retrenchment of staff (in the remaining six months) to ensure WHO does not end up with an operational debt at the end of the biennium. The freeze on mandated contributions by member states is forcing the WHO to shape its budget in accordance with donor preferences. There is likely to be a proposal from the WHO secretariat on the table asking for a 10% increase in assessed contribution by countries. It is critical to the WHO’s survival as an independent norm setting organization that this discussion be taken forward to unlock the freeze on contributions by countries.

WHA 69 had directed the DG to report to the 70th WHA on progress made and experience gained in establishing and operationalizing the Health Emergencies Programme, set up in the wake of the Ebola epidemic in 2014. Some progress has ensued through the setting up of an Emergencies Oversight and Advisory Committee and the commencement of discussions on a blueprint for research and development preparedness. However the need for adequate funding of the Emergency Programme in particular must be discussed, especially in the light of a severe shortfall envisaged for the programme.

The Assembly will discuss updates on progress made in implementing the global action plan on antimicrobial resistance (AMR), adopted by the WHA in 2015. There are serious concerns about the lack of progress on the global development and stewardship framework for tackling AMR. Leadership with respect to research must involve the WHO, the World Organisation for Animal Health (OIE) and the Food and Agriculture Organization of the United Nations (FAO).  Research should be supported in national plans but developing the broad research agenda is a global project and this is one of the functions of the proposed development and stewardship framework.

In the wake of the Ebola epidemic, attention has been focused on compliance with International Health Regulations (IHRs) and this will be discussed at the WHA.  IHRs were created as instruments for promotion of solidarity actions among countries in the course of promotion of global health. We see currently the promotion of a security approach to IHRs designed to secure more wealthy countries from possible threats to health from countries vulnerable to epidemics. Exerting pressure on developing countries to comply with obligations without creating the conditions which allow them to invest in health systems is contrary to the very purpose of IHRs.

The Assembly will debate on the item titled “Human resources for health and implementation of the outcomes of the United Nations’ High-Level Commission on Health Employment and Economic Growth”.  Unfortunately previous discussions on this issue advance the links between health employment and health systems through an ‘investment’ lens rather than with a view to promote access to health care as a fundamental human right. Required are discussions to establish governance mechanisms and sustained funding through bilateral agreements which integrate cost sharing, mechanisms for reimbursement of source countries (of health workers) and through progressive taxation measures. This calls for review of the WHO Global Code of Practice on International Recruitment of Health Personnel and strengthening of public health systems in source countries.

Finally Governance reforms in the WHO including progress on the ‘Framework of Engagement with non-state Actors’ (FENSA) will form part of the agenda of the WHA. There has been a constant push towards a certain vision of reform that aligns WHO with the interests of large donors, including private philanthropies and Northern governments. The success (or failure) of such a vision will depend on the pushback from low- and middle-income countries.