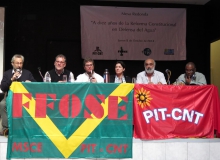 Overall, a positive assessment, but “there are many challenges ahead”. This was the conclusion reached by the panel of speakers at a round-table discussion entitled “Ten years After Constitutional Reform in Defence of Water”, organised by the National Commission in Defence of Water and Life (CNDAV) on 9 October, at the offices of the union centre, PIT-CNT.

Ten years have gone by since October 2004, when 64% of the Uruguayan people voted to preserve water services as a public good that should be administered exclusively by the state. This expression of sovereignty forced an amendment to the constitution, recognising water as a basic human right and prohibiting the privatisation of water resources and services.

Uruguay became a pioneer and reference point on the issue and its declaration on water as a human right was backed by the United Nations in 2010.

The invited speakers said that although the constitutional reform on water represented a significant victory and made Uruguay a national and international reference point on the issue, they were concerned at the lack of compliance on some aspects.

“Even today, 40% of shares are in private hands in Maldonado (department where Punta del Este is located)”, said Carlos Sosa, president of FFOSE, who presented a review of the most important events in the fight by social movements and trade unions to stop the privatisation of public services, including water.

Assessing the last ten years, Soza added: “Our people’s fight to ensure full compliance with the constitutional reform is as necessary as ever. However, I also think that this is a moment to be proud and satisfied, a moment to thank our people and our colleagues who managed to get this reform adopted. We have showed that we can achieve the objectives we set ourselves if we stay united and take action, and that is very commendable”.

Dr Marcel Achkar said that the 2004 reform was a milestone because it validated the people’s participation in the administration and control of water. However, he said that the constitutional amendment should be more explicit in order to deal with other threats, such as the privatisation of land, intensive agriculture and foreign purchase of land for agricultural, energy and mining purposes, all of which have an impact on the hydrological system, as is currently becoming clear.

“If we want to develop plans for the sustainable management of water, we cannot ignore the issue of soil, because these issues are closely connected. Degraded land will produce poor quality water. It is important to take this into account when we are formulating a national water resources plan”, he said.

“The reform had been an interesting process that brought Uruguayan society face to face with a series of challenges, in regard to which we have made a lot of progress. Now we have to speed things up. Degradation, pollution and the privatisation and control of natural resources by transnational companies are still limited and we have time to reverse the process. The lesson that we have to learn from this reform is that when the public has a clear objective and is prepared to act, it is possible to reverse privatisation. The action sparked by the push for reform required the exit of one of the most aggressive companies operating in the Latin American water resources sector. However, the Uruguayan people won and it had to get out” he recalled.

Daniel González, Director of DINAGAUA, also highlighted the progress made thanks to the constitution reform and mentioned the current state of legislation on the issue. “Are we content with what we have achieved in the last ten years? No. At this stage of the game, we want a lot more. However, we realise that things could have been different if we had had to deal with other interlocutors during these ten years. Other governments would have done their best to promote privatisation, and Uruguay could have been very different from the country we are talking about today. To conclude, my assessment is that we have made a lot of progress thanks to the reform, but we must remain active, encourage participation and keep the pressure on to make further progress with the reform”, he said.

Water should be a human right in practice

On behalf of the PSI, Óscar Rodríguez congratulated the Uruguayan people for the achievements celebrated on this anniversary. He listed some of PSI’s objectives on water and sanitation in Latin America, for example, the need for a continent-wide campaign by organised workers, through their trade unions in state-owned water companies, including FFOSE. “We are considering providing support for projects to strengthen the networks needed to implement this strategy so that access to water is a human right in practice and not just a statement on paper”, he said.

He also said that the PSI is building structures to promote cooperation; share information and experiences with other important Latin America organisations; consolidate alliances on the issue of water; promote public-public partnerships, as opposed to public-private partnerships; influence reform of public policies so that the right to water is more widely recognised; and promote the use of water in conjunction with protection of the environment. “And, of course, one of our objectives is to continue to accompany FFOSE during the next ten years at least in its fight for recognition of the right of access to water as a basic human right”.

Finally, Anahit Aharonian pointed out that some Uruguayan and foreign researchers have denounced the environmental impact of the model used to exploit forestry, cellulose and soya resources in Uruguay, but that unfortunately, nobody is listening to them.

These large industrialised plantations, he explained, need a lot of irrigation and fertilisers like nitrogen and phosphates, which have a harmful impact on our waters. In order to make the water fit for human consumption, the government has to spend money. On the other hand, these plantations produce soil abnormalities, many of which cannot even be remedied.

He highlighted the need to take into account that mining and industrialised agriculture consume large quantities of water and energy, cause a lot of pollution and require the rapid construction of major roads to transport their goods. These roads, he said, often destroy everything in their path, including indigenous communities and ecosystems, and it is the government that ends up having to pay for all this.

“The profits made by forestry companies have been maintained at the expense of environmental  capital and this is not taken into account. It includes the loss of water and biodiversity, degradation of the soil and habitats and the deterioration of ecosystems”, he warned.

In conclusion, he said: “We are here to celebrate ten years of water reform. It is true that we threw out the water transnationals, but we should be aware of other threats and investigate them. We should be aware of the damage that has already been done and the damage that we could prevent. We should not be spending money to remedy the disasters caused by the private sector, which pockets the profits and leave us to pay for the damage. We have to keep this in mind at all times. We have to keep ourselves informed, keep the pressure on and promote the changes that are necessary to preserve our public goods in this country”.