Violence against women is an age-old problem – it is time to end it now. 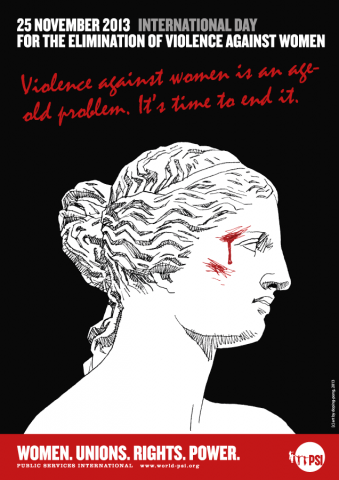 “If we act with courage, conviction and commitment, we can change violence against women from being the most pervasive violation of human rights to being a rare occurrence that is considered unacceptable and no longer tolerated.” Michelle Bachelet, Executive Director of UN Women, on International Women’s Day (8 March 2013).

The United Nations reports that 70% of women in the world are faced with some form of violence in their life and all too often they are blamed or punished themselves. Gender-based inequalities continue to deny women a say in the decisions that affect their lives. Domestic violence is the most prevalent form of violence that affects women, whereas forced marriages of young women and girls, rape and spousal killings are still meted out on women every day with impunity. Discrimination and hate crimes linked to sexual orientation are also prevalent around the globe.

We have to note a worrying rise in terror campaigns against women trade union leaders, such as in Columbia and Guatemala. It is additionally shameful that the law on femicide in Guatemala is misused to target trade unionists. This means that a good law is not used to protect women, but to attack union activists and workers’ rights.

Violence at the workplace; be it sexual, physical or psychological happens everywhere – and must be stopped. “Public sector workers are well-placed to promote and enforce laws and rules that advance gender equality and protection against violence and harassment. Quality public services are often the only shield and support for women in this situation. Violence against women creates inequality, affecting the well-being of current and future generations. Violence and the threat of it deprive women of their basic human rights,” says Rosa Pavanelli, General Secretary of Public Services International.

Women’s rights are a central issue for the trade union movement, and connected to action on health, peace, human rights and sustainable development. In March 2013, the UN Commission on the Status of Women adopted agreed conclusions on the elimination and prevention of all forms of violence against women and girls, reaffirming the Beijing Declaration and other international instruments. Governments have made many commitments in the past that have not led to concrete results. Far too often, cultural, religious or political views are used to block gender equality. Urgent action is needed to strengthen and accelerate implementation, which is now too slow and uneven.

”Ending violence against women is a matter of life and death. It is not acceptable that everyday women around the world are beaten, raped and killed. Brutality and inequality must end. States must provide adequate measures to prevent violence and protect threatened women, prosecution, counselling and education to change the mentality of people. Shelters for abused women should be provided, and it is unacceptable that under austerity policies those services are abolished in many countries. We need strong commitments from states to end violence against women,” says Pavanelli.

PSI and our affiliates can work together and with civil society organisations to break the silence and mobilise against discrimination and violence in our workplaces and societies. This can include measures in collective agreements, pressuring governments to enforce laws provide the necessary resources to assist victims, and train judicial authorities and the police to deal adequately with issues of violence against women and girls. We also support initiatives such as the White Ribbon Campaign that focuses on prevention of violence through the education of men and boys and their involvement in the fight for gender equality.

We call on all PSI affiliate members, men and women, to make a pledge to end violence against women and girls, at each of their workplaces around the globe.

Violence against women is an age-old problem – it is time to end it now.

Around the world – unions are implementing campaigns and organizing events.

Please send reports of your events to equality@world-psi.org.

PSI Statement - International Day for the Elimination of Violence Against Women