USA: Gay and transgender discrimination in the public sector 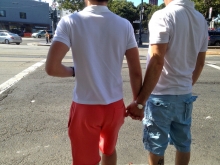 There are approximately 1 million gay or transgender individuals in America today working in state, local, or municipal government. A new report shows that when lesbian, gay, bisexual and transgender public workers experience on-the-job discrimination, it isn’t only the workers who suffer, but taxpayers, too.

A new report by AFSCME and the Center for American Progress (CAP) shows that when lesbian, gay, bisexual and transgender (LGBT) public workers experience on-the-job discrimination, it isn’t only the workers who suffer, but taxpayers, too.

Rather than being evaluated on their skills, qualifications, and ability to contribute on the job, gay and transgender workers are all too often not hired, not promoted, or,
in the worst cases, fired from their jobs based solely on their sexual orientation and gender identity—characteristics completely irrelevant to job performance. Sadly, for
gay and transgender workers discrimination results in significant job insecurity and makes it more difficult for them to make ends meet and provide for their families.

Government employers who discriminate have a harder time recruiting and retaining the best workers, according to the report, as they suffer from diminished workplace productivity. They expose themselves to costly litigation. In short, discrimination against LGBT workers makes government inefficient, which, in the end, costs taxpayers.

Download summary of the report Gay and Transgender Discrimination in the Public Sector.

Download the full report Gay and Transgender Discrimination in the Public Sector.