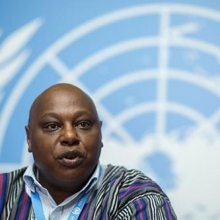 UN Special Rapporteur on the Right of Peaceful Assembly and Association, Mr. Maina Kai, has reminded the ILO that the right to strike is fundamentally enshrined in international human rights and labour law, and that its protection is necessary in ensuring just, stable and democratic societies.

After the Human Rights Council side event on freedom of association and of peaceful assembly in the workplace, which took place on Monday 6 March 2017, the UN Special Rapporteur said, “as the 329th session of the Governing Body of the ILO starts today, I wish to reiterate the utmost importance of the right to strike in democratic societies.”

In 2016, the Special Rapporteur established in his thematic report to the General Assembly of the United Nations that the right to strike has been established in international law for decades, in both global and regional instruments, such as in the ILO Convention No. 87, the International Covenant on Economic, Social and Cultural Rights, the International Covenant on Civil and Political Rights, the European Convention on Human Rights, and the American Convention on Human Rights. The right is also enshrined in the constitutions of at least 90 countries. The right to strike has in effect become customary international law.

In reiterating that the right to strike is also an intrinsic corollary of the fundamental right of freedom of association, he also emphasized that “the right to strike is crucial for millions of women and men around the world to assert collectively their rights in the workplace, including the right to just and favourable conditions of work, and to work in dignity and without fear of intimidation and persecution.”

He also stressed that, “protecting the right to strike is not simply about States fulfilling their legal obligations. It is also about them creating democratic and equitable societies that are sustainable in the long run.”

Finally, he urged “all stakeholders to ensure that the right to strike be fully preserved and respected across the globe and in all arenas.”