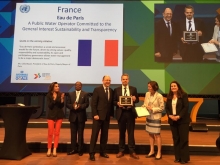 Seven years ago the City of Paris brought their water supply back into public hands. Today they received one of the highest international public service awards at a special UN ceremony at The Hague.

The award comes on the back of a wave of substantive research on the failures of privatisation and the benefits of public provision.

Just hours before the ceremony, Transnational Insititute, PSI and a wide coalition of partners released a new comprehensive publication - Reclaiming Public Services - which includes the Eau de Paris remunicipalisation as a key case study for how local communities can fight to win back public goods.

"Our research shows that there have been at least 835 examples of (re)municipalisation of public services worldwide since 2000, involving more than 1,600 municipalities in 45 countries... There are many motivations behind (re)municipalisation initiatives: a goal to end private sector abuse or labour violations; a desire to regain control over the local economy and resources; a wish to provide people with affordable services; or an intention to implement ambitious climate strategies."

The decision and processes to create a unified public water operator for the three million users in Paris was deliberate, participatory and transparent.  The reasons were both pragmatic and political, in the sense that the public operator needed to control the full water cycle to ensure better service and to fulfil political commitments to implement the human right to water for all Parisians.

Bringing local public services under public control is a major democratic issue, especially for such essential services as energy or water. It means greater transparency and better citizen supervision. In the context of climate change, it can contribute to leading our cities toward energy efficiency, the development of renewables, the conservation of our natural resources, and the right to water. ”

The decision process consisted of many public consultations, validated by two elections of the government of Paris.  These elements of vision, consultation and validation prior to taking an important decision are too often lacking.  The absence of these democratic elements often leads to unsustainable proposals and weaker democratic institutions for implementation.

The merit of the Paris process continued after remunicipalisation.  The new structure – Eau de Paris –  has a board of directors composed of various stakeholders, which allows different perspectives to inform decisions, in a systemic fashion.  The integration of the various components of water supply allows a variety of technical/financial solutions that were not possible in the previous structures.  Noteworthy are the programmes relating to the urban poor and disadvantaged, as well as the attention paid to upstream and downstream actors to protect the environment.

The award and new publication serve as both an endorsement and yet further evidence of the failures of privatisation and the benefits of public provision.