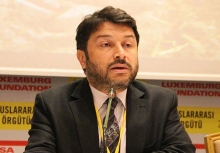 Court in Istanbul will release Director of Amnesty Turkey, İdil Eser, and other activists who were arrested in July. Campaigners will press for the release of Amnesty Turkey's Chair, Taner Kılıç (pictured), whose separate trial begins on 27 October.

"Today, finally, we celebrate that our friends and colleagues can go back with their loved ones and can sleep in their own beds for the first time in almost four months.

"But any joy is tainted by the ongoing detention of Amnesty International's chair, Taner Kılıç, whose separate trial is due to start tomorrow.

"These politically-motivated prosecutions are an attempt to silence critical voices within Turkey but have only served to highlight the importance of human rights and those who dedicate their lives to defending them.

"Tonight we take a brief moment to celebrate, but tomorrow we will continue our struggle to ensure that Taner, İdil and their colleagues are acquitted of these baseless charges. We will not stop until the charges are dropped and all of them are free.”

Ten activists, including İdil Eser, the Director of Amnesty Turkey, were arrested on 5 July, whilst Amnesty Turkey's Chair, Taner Kılıç, was arrested a month earlier. They are accused of "membership of a terrorist organisation".

Campaigners will press for the release of Taner Kılıç, who will also appear at a hearing tomorrow in Izmir on a separate charge of "membership of the Fethullah Gülen Terrorist Organisation".

Since a failed coup in mid-2016, the Turkish authorities have undertaken a wide-ranging crackdown on civil society institutions. Criminal investigations have been opened against 150,000 people accused of being part of the “Fethullah Terrorist Organisation,” which the government claims masterminded the coup. Some 50,000 people are currently jailed, including at least 130 journalists, the highest number of any country in the world. More than 100,000 public sector workers, including a quarter of the judiciary and hundreds of academics, have been arbitrarily dismissed.