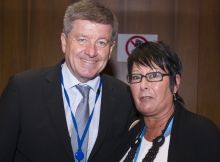 An important step forward was taken towards improving employment and working conditions in the health services with commitments jointly made by governments and social partners at a tripartite meeting held on 24-28 April, at the ILO.

The Tripartite Meeting on Improving Employment and Working Conditions in the Health Services was the first sectorial meeting of such profile on health services, since 1998. The purpose of the meeting was to “discuss decent work strategies that effectively address health workforce shortages, as a prerequisite to enable provision of equal access to health care for all in need, with a view to adopting conclusions on future programme development and to inform policy-making on the selected topic at the international, regional and national levels.”

In her opening speech, Rosa Pavanelli noted that:

Privatisation, commercialisation and cuts in the funding of public health; liberalisation of health services delivery, driven by free trade agreements; increased corruption; increasing labour market flexibilisation and deregulation, including outsourcing of non-clinical and clinical services; climate change, violent conflicts and humanitarian disasters and demographic transitions are all challenges for the health sector.

To address these issues and achieve “the aim of equal access to health for all and ensuring that we have the required trained workforce needed to deliver this,” she stressed the necessity for: International Labour Standards to be respected by governments and employers; discouraging non-standard forms of employment and precarity; safe and effective staffing for health; fair and ethical health workers’ migration; combating workplace violence, including in humanitarian settings; standardization of guidelines, including for Community Health Workers; rolling back the commercialisation of health by multinational corporations, and; due respect for trade union rights.

The Governments’ group spokesperson Mme Habiba Kherrour, Premier Secrétaire of the Algerian Permanent Mission to Geneva pointed out that the meeting was quite important against the background of the Sustainable Development Goals. While expressing the view that governments’ funding of public health has been constrained by the global economic downturn, virtually every government present agreed that expenditure on health, including health employment is an investment and not cost.

This reflects the conclusions reached by the United Nations High-Level Commission on Health Employment and Economic Growth (CommHEEG), which the PSI General Secretary, Rosa Pavanelli represented the labour movement and public services on, as a commissioner. A side event was organised presided over by Guy Ryder, the ILO Director General, where Jim Campbell from the World Health Organisation led an incisive discussion on the work and recommendations of the ComHEEG.

Based on the consensus that investing in the health workforce is of paramount importance, it was pointed out that austerity measures will not help matters. Speaking for the Workers’ group, Rosa Pavanelli called for tax justice, saying: “We do believe that a major cause of injustice around the world is the broken taxation system, including tax evasion, tax dodging and tax loopholes.”

The Workers’ group was also successful in preventing tripartite support for Public-Private Partnerships (PPPs). There is a rich evidence base for concluding that PPPs simply amount to the subsidising of private interests with public funds. While private investments cannot be discountenanced, these have to be adequately regulated and should not be passed off as being in partnership with public health, which is the mainstay of universal access to health care.

Occupational Safety and Health (OSH) was likewise stressed as being essential for sustainable delivery of quality health services. The fatal dilemma faced by health workers without personal protective equipment in Liberia at the onset of the Ebola outbreak was pointed out as a macabre example of the dangers posed when there are flawed OSH regimes in place. This is not tolerable. As Pavanelli pointed out “it is not fair to call workers that die because of lack of OSH measures being in place, heroes. They deserve their dignity while alive, and to be kept alive”.

Towards ensuring decent work in the health services, as governments rise up to meet the envisaged shortfall of 18 million health workers globally by 2030 if action is not taken now, the following recommendations were made, in the conclusions of the meeting: