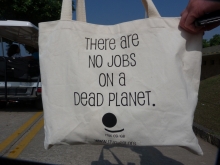 The Rio declaration lacks commitments to concrete action on all issues, states ITUC, The International Trade Union Confederation. They are "bitterly disappointed" by the declaration that is now presented to world leaders at Rio+20.

There will be no social justice without environmental protection.

The international trade union movement came to Rio with a set of clear demands and an agenda that integrates the three dimensions of sustainable development, supporting a social protection floor, decent and green jobs and a financial transactions tax.

We recognise that the Rio Declaration that will be presented to world leaders &nbsp;contains some of the labour movement's key demands including human and trade union rights, social protection for poverty eradication, decent work at the core of job creation policies, green jobs promotion and the role of trade unions.

However, trade unions are bitterly disappointed that governments did not champion or link other critical issues or set out agreed actions that would integrate the social, environmental and economic program the world needs.

The Declaration lacks commitments to concrete action, "implementation measures" on all issues. We need specific commitments to drive investments in creating the jobs of the future and strong social protection programs, as well as global commitments on regulating our commons.

The Declaration presented today does not balance the three dimensions of sustainable development. It steps back on environmental protection and women's reproductive rights. Its contents do not drive real change to the current economic model which we know is based on the exploitation of natural resources and inequality. Rio was a huge missed opportunity to ensure ecology, equity and economy are integrated and international action agreed.

Despite some good elements, the Rio+20 Declaration does not change the trajectory of the current model. Trade unions who have been part of the process have not seen governments strongly connect the social agenda to the environmental one. For example, natural disasters will make it impossible to assure universal social protection. The lack of new investment commitments in renewable energy, transport or energy efficiency will not tackle the unemployment crisis. No commitment to innovative global revenue sources, that a financial transaction tax could generate, leaves empty any real capacity to fund action for sustainable development.

The Declaration does not build momentum around the need for global regulation and governance, and shows the lack of willingness from governments to adopt new commitments or strengthen a binding framework for environmental decisions, that a UN environmental agency would have done.

At the Trade Union Assembly ahead of the Summit, 66 national trade unions from 56 countries agreed on an agenda of action for the future. Before getting to Rio we knew that the Rio+20 Summit was never going to save world. But we expected governments to be much more ambitious and seize the opportunity to get international agreement on the way forward. Trade unions are committed to doing their part for a sustainable development at all levels, in our workplaces, our communities, in our negotiations with employers, and in the way we vote.