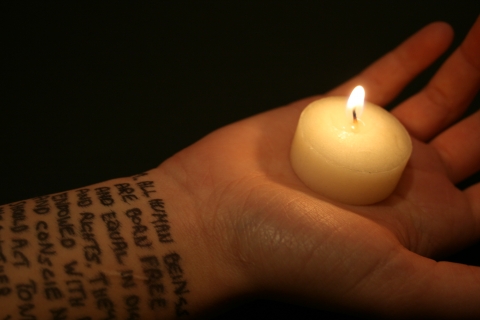 This year, International Human Rights Day falls in a time of serious threats to social cohesion, environmental sustainability and democracy. Only weeks after a series of dreadful acts of terrorism, and while the UN Conference on Climate is ongoing, PSI reaffirms its commitment to the defence of human rights, core elements of fair and prosperous societies.

“The unprecedented wave of violence across the world urges us to reiterate our call for peace and solidarity.  We are ever more aware of the need to tackle the root causes of terror, such as social exclusion and economic inequality,” said Rosa Pavanelli, PSI General Secretary.

Global instability is the consequence of the profit-driven policies that also contribute to the alarming climate crisis. However, the interests of multinational companies and a few economic global players do not coincide with the objectives of climate and social justice, with the respect of people's fundamental rights and freedoms.

In particular, PSI is concerned about the major crisis facing human rights law and institutions. Multilateral bodies, such as the United Nations Human Rights Committee and the International Labour Organization, are under attack. Human rights and labour rights are undermined by the supra-legal status accorded to corporations and investors in the new round of trade agreements, such as TPP, TTIP and TISA.  These agreements will make it increasingly difficult to guarantee respect for human rights, environmental sustainability and universal access to quality public services for hundreds of millions of people, especially in emerging and developing countries.

Today, PSI affiliates and workers around the world are faced with labour reforms that undermine the right to collective bargaining and the right to strike, reforms that are imposed as part of structural adjustment and austerity packages.  In some countries, collective agreements are being simply cancelled.

“We are outraged at the blatant denial of fundamental rights at work and at the increase of forms of bonded labour, unprecedented since the abolition of slavery,” commented Rosa Pavanelli.  “We call for the recognition and respect of the right to organise, collective bargaining and the right to strike as a human right for all workers, regardless of their status.  Trade unions defend labour rights and work hand in hand with the human rights movement, environmental justice groups and civil society. Together, we must defend freedom of expression, and open political dialogue and engagement. Human rights must supersede corporate rights.”

Workers' rights to freedom of association by forming trade unions are set out in the Universal Declaration of Human Rights and the International Covenant on Civil and Cultural Rights. In the context of freedom of association, the right of workers to strike is specifically stated in the International Covenant on Economic, Social and Cultural Rights. ILO Convention 87 forms part of customary international human rights law. Human Rights Day is observed every year on 10 December. It commemorates the day on which, in 1948, the United Nations General Assembly adopted the Universal Declaration of Human Rights.

Also see the "Route of Shame" in London on 10 December organised by PSI affiliate UNISON (UK). The ‘route of shame’ will visit a number of embassies and high commissions with poor records on workers’ rights. A letter will be delivered by hand to the residing ambassador/high commissioner protesting their country’s abysmal record in promoting and protecting rights.