A tale of two unions: How public sector unions helped to unleash a surge of democratic reform in Egypt 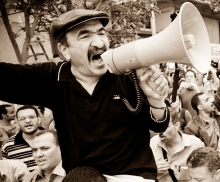 During 2011, two independent unions in Egypt affiliated to PSI began participating in the activities of the PSI project “Campaigning for workers’ rights in Arab Countries” which took place between 2009 and 2011. Through this project, supported by affiliate IMPACT (of Ireland) in collaboration with FNV Mondiaal (a trade union solidarity support organisation from the Netherlands), PSI has been able to play a concrete role in affirming the emergence of a democratic and independent public sector labour movement in Egypt.

Up until April 2009 all trade unions in Egypt were controlled by the state and the possibility for workers to have their interests represented was severely limited by the fact that the Mubarak regime intervened in the officially-registered trade unions. However, the Real Estate and Tax Authority Employees’ Union (RETA) refused to submit to regime control and submitted its registration as an independent union and sought affiliation to PSI in 2010.  PSI supported RETA’s struggle for independence and survival when it was attacked and suppressed.  During 2011, RETA and another new PSI affiliate, the General Union of Health Technicians, GUHT, began participating in the activities of the Arab Countries Workers’ Rights project and aligned these with their fight for their members’ rights, terms and conditions and to contribute towards their revolutionary struggle for a democratic Egypt.

In 2010, when PSI accepted the affiliation of RETA, Egypt’s first independent and democratic trade union, the projects previously participating unions resigned from PSI rather than work with an independent union. In 2011, RETA and another new democratic PSI affiliate GUHT, comfortably adopted the project objectives and during that extraordinary year, utilised the project in their existing struggle to change the course of Egypt’s history.

Ghassan Slaiby, PSI sub-Regional Coordinator, illustrates the atmosphere and strength of the new unions’ independence at that time:

What was amazing was that the union understood and could easily embrace the objectives very quickly. They didn’t want money and preferred to save resources on hotel costs, ‘We don’t need to go to a good hotel, we will sleep in the local offices’ they said.  Their contributions were incredibly important because they were involved in the creation of democracy and demanding social justice in their country.

The first project activity to take place, in May 2011, was a campaign review and strategic planning workshop.  The participants discussed attitudes, processes and elements as well as democratic and analytical planning processes.  They developed their own strategic plan and in response to the widespread and extreme Government corruption which had resulted within the public sector in meagre salaries for the masses and enormous ‘fat cat’ pay for the old regime’s cronies; they developed a minimum and a maximum public sector wage campaign.

Immediately after and complementing the fall of the Mubarak regime the campaign was heard by the Government through mass sit-ins in front of the Health Ministry and Cabinet and strikes at hospitals.  Workplace awareness-raising reached thousands of workers.

In October, mobilisation and organising techniques were refined at a three day workshop which dealt with topics such as how to evaluate trade union actions, how to promote the role of women and how to develop trade union statements.  Additionally in December, a gender equality campaign workshop helped participants to identify discrimination and its causes, how unions are organised and how to run efficient women’s committees.  The workshop resulted in the women formulating a (subsequently successful) demand to their unions’ executive boards, requesting assistance to create and promote Women’s Committees.

RETA and GUHT paved the way for PSI’s engagement with the new democratic labour movement in Egypt, as since then, three new unions have affiliated to PSI and today public sector workers can hold their union leaders to account.

However, since those ‘heady’ revolutionary days, Egyptians face complex political challenges and massive change is still required. Wages remain very low, public service funding is problematic and corruption remains a challenge.  The unions also face their own internal challenges and not least, the battle for gender equality.  However, through its project cooperation with IMPACT, PSI has been able to play a concrete role in affirming the emergence of a democratic and independent public sector labour movement in Egypt.

For a complete survey of IMPACT/PSI trade union development cooperation between 2008 and 2013 click here: In the People's Interest

Map: IMPACT/PSI project collaboration between 2008 and 2013