Take Action: Call for the release of Han Sang Gyun 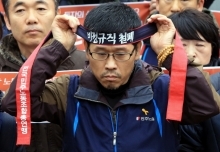 PSI is calling on all affiliates to join the renewed joint ITUC and GUF international campaign calling for the release of Han Sang-gyun and the withdrawal of the charges against Lee Young-joo, respectively former President and General Secretary of the Korean Confederation of Trade Unions (KCTU).

Send a letter of protest to President Moon and join the Day of Action on 9 February 2018.

The ex-president of the Korean Confederation of Trade Unions (KCTU), Han Sang-gyun, is still serving his three-year sentence in Hwasung Correction Centre. Han was leading the trade union movement in various protests and the people’s rally on 14 November 2015 against the regressive labour reforms under the former Park Geun-hye government.

Less than a year in power since the anti-worker government under Park Geun-hye was toppled by mass demonstrations, President Moon Jae-in has pledged to end the use of irregular workers in the public sector and to increase the minimum wage by sixteen per cent. His government has yet to follow the recommendations of the UN Working Group on Arbitrary Detention and the ILO Committee on Freedom of Association (CFA) to release Han or revoke the wrongful charges against the trade union leaders taking part in the people’s rally in 2015.

Despite the repeated calls of international trade unions, Han was not included in the special pardon granted by the Korean President last December. Instead, on 31 December 2017, the ex-General Secretary of KCTU, Lee Young-joo, was arrested by the police when she left the headquarter of the ruling Democratic Party where she had been taking a hunger strike for ten-days in protest of the amendments to the Labour Standards Act. The 2 years prior to the hunger strike, she had been staying in the KCTU office to secure her activity as general secretary in the risk of arrest, as the police had also issued an unlimited arrest warrant for her role in organising the People’s Mass Mobilisation of November 14, 2015.

The international trade union movement welcomed the election of President Moon Jae-in and had expected him - as a former human rights lawyer - to implement his campaign promises by revoking the anti-labour policies of the Park Guen-hye government, ratifying ILO Convention 87 and 98, and releasing Han Sang-gyun. President Moon has yet to fulfill these commitments.

Lee Young-joo was dismissed as a teacher in 2016, and the Korean Teachers’ Union – de-certified by the Park Guen-hye government – has not been able to have its certification reinstated under Moon Jae-in’s government. Lee will be sent for trial between February and March.

The ITUC supports the KCTU and the GUFs in a renewed international campaign to demand the release of Han Sang-gyun and the withdrawal of the charges against Lee Young-joo.

We ask for your solidarity to support the following actions: