The struggle of precarious school workers in Korea 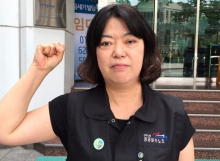 This was the name used to refer to precariously employed female school workers when I first began working as a high-school teachers’ room secretary 13 years ago in Korea. Only a short while after I began, I learned that I had been hired to replace the previous secretary because she was thought to be too young, ill-mannered and lazy. Many thought that as an older married women I would be more prudent and dedicated.

I expected to carry out “supplementary” tasks, but I was often required to do whatever the principal, assistant principal or teachers told me to do, whether it be an official responsibility or personal request or “favor.”

The situation I faced was one of extreme disrespect and discrimination. I was given unilateral instructions without prior consultations. My colleagues and my work were automatically labelled “supplementary” – that is, not essential but secondary – as if to intentionally discriminate between teachers and precariously employed support staff. We were addressed as “Auntie,” ssi or yang, rather than by titles that acknowledged our important work responsibilities. During the holidays, we were excluded when gifts were handed out to the staff. Our pictures were not even printed in the school yearbooks. It was as if we were invisible.

In Korean (name) ‘ssi’ is a form of impersonal address, which contains no indication of rank or title. In most institutions it is normal to address employees by their title. For example, in schools where teachers are referred to as (name) ‘Seonsaengnim’, to use (name) ssi connotes lower rank or a measure of disrespect. (Name) ‘yang’ is used in a similar way to ‘ssi’ for girls/young women. ‘Seonsaengnim’ literally means ‘teacher’ but is generally used for to address people in professional occupations or to show respect.

When I was still a newcomer I felt I could not say ‘No’ when I was given unfair work instructions or complain after suffering discrimination. But it soon got to the point where I could no longer stand this denial of my rights and dignity simply because I was female and precariously employed.

This is when I began the struggle together with other precarious school workers.

All work that takes place in schools is a form of education. Recognising this, we began to insist that we be addressed with respect as ’Seonsaengnim’ (Teacher). We also insisted that the work we do be recognised as important, not merely secondary, and that the term ‘supplementary’ be dropped from job descriptions. We demanded that we be given a say in decisions about how the school is run just like the rest of the staff.

The goal of this struggle was to make a connection between efforts to alleviate discrimination faced by precarious workers and the ideal of creating democratic, equal and inclusive schools. In other words, our struggle was part of an effort to revitalise true education and learning in the face of the take-over of our schools by the logic of neoliberalism and its essential disrespect of human beings.

The efforts of precarious school workers began in this way and grew through union organising. Through our union we have declared ourselves subjects and members of the school community. Our struggle continues, in the schools and throughout society.

In South Korea, capital and the conservative government are trying to create conflict between workers based on occupation and their levels of compensation in order to push forward their agenda of public service cuts, privatisation and structural adjustment. In this context, the struggle of precarious school workers is not simply about our rights as individuals. Rather, the struggle of precarious school workers and teachers together is a struggle to defend quality public education for all workers and citizens.

I believe the situation globally is similar, and there is a lot we can learn from one another. I hope that through the PSI Education Support and Cultural Workers Network, we will be able to share concrete experiences of organising and campaigns to change government policy. I hope the network will be a means for regular communication to develop concrete strategies to extend global solidarity to ongoing struggles at the national and local levels. Beyond this, I hope we can come up with a global platform for collective action that serves to recognize all workers for the valuable contributions they make to education and society.

See video interview with Bohee Choi who talks about the precarious work situation of education support workers in Korea.