Stand up for human rights: People over Profit! 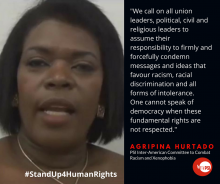 In the lead-up to the 70th anniversary of the Universal Declaration of Human Rights in December 2018, join us in fighting racism and standing up for human rights!

This year will mark the 70th Anniversary of the Universal Declaration of Human Rights.

“Putting an end to discrimination and racism is at the core of our struggle for human rights, dignity and equity. Putting people over profit, rising up in unity against those who want to divide us remains what is needed to redress the massive inequalities we are faced with today. This vision drives our policies on migration and refugees and our continued call for inclusive societies that work for the benefit of the many.” - Rosa Pavanelli, General Secretary of Public Services International

Every person is entitled to human rights without discrimination. The rights to equality and non-discrimination are cornerstones of human rights law. Article 1 of the Universal Declaration of Human Rights states that all human beings are born free and equal in dignity and rights. Based on Article 2, everyone is entitled to all the rights and freedoms set forth in the Declaration, without distinction of race or any other kind.

Yet racism, xenophobia and intolerance are problems prevalent in all societies, and discriminatory practices are widespread, particularly targeting migrants and refugees as well as people of African descent. Governments must take comprehensive measures to combat racism, racial discrimination, xenophobia and related intolerance, and to promote tolerance, inclusion, unity and respect for diversity.

These goals will not be achieved without securing workplaces free from discrimination, racism and xenophobia. National law should require all workplaces to have anti-discrimination policies and procedures in place as well as mechanisms to implement and monitor them. All public services should operate at best practice standards. Unions must support these efforts by being involved in the development, implementation and monitoring of workplace initiatives, through union workplace education and by organizing against racist and xenophobic political activity in the workplace.

Agripina Hurtado Caicedo, Coordinator of PSI’s Inter-American Committee to Combat Racism, Xenophobia and all related forms of discrimination says: “Public Services International is very concerned about the significant increase of xenophobia and racism prevalent in social networks and the media, but also in society at large. It is very worrying to see how certain governments and ultra-right groups seek to create panic and divisions both within their own populations as well leading to the rejection of the "other”. We call on all union leaders, political, civil and religious leaders to assume their responsibility to firmly and forcefully condemn these messages and ideas that favour racism, racial discrimination and all forms of intolerance. One cannot speak of democracy when these fundamental rights are not respected. We need to stand up for values such as equality, solidarity, fraternity and respect for life and diversity.”

Every day, each and every one of us can stand up against racial prejudice and intolerant attitudes. In the lead-up to the 70th anniversary of the Universal Declaration of Human Rights in December 2018, join us in fighting racism and standing up for human rights!