Speech by Rosa Pavanelli at the ILC 2016 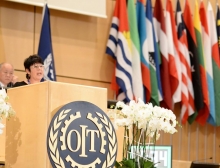 And all participants of this 105th International Labor Conference,

I speak on behalf of Public Services International, an organization as old as the ILO that represents 20 million public services workers all around the world.

PSI welcomes the agenda of the 105th International Labour Conference and we welcome the Director General’s report addressing the most critical issues in front of us.

Millions of refugees are fleeing conflicts, persecutions, natural disasters and hunger. The European Union has been unable to receive and decently host 1 million refugees, outsourcing to third countries (not always democratic) its legal and moral responsibility to ensure protection and respect the fundamental human rights of these people, in majority women and children. At the same time, the developing countries are hosting 86% of the 19 million refugees estimated at the end of 2014.

While cooperation with Middle East and North Africa countries is essential, we are worried about the derogation of fundamental human rights it entails. Turkey, Egypt, Algeria, are only few of the countries where the emergency situation is equally being used to harass, repress, intimidate, imprison and even kill political opponents, and civil society and trade union activists. This is unacceptable and the consequences are unpredictable and can add uncertainty to our future.

A rights-based approach that includes access to decent work, healthcare and education for all is the response that can build a prosperous future for all, and that the ILO can contribute to effectively.

The ILO proposal to revise Recommendation 71 is the right way to address the problem and to broaden and update its scope.  The draft conclusions offer a holistic approach that can be adapted to all situations.

Once again, the obstacle to reach a fair agreement lies on the decision of some member states and employers to no longer set standards.

The three ILO constituencies have always had a constructive approach, where decisions are agreed and taken by consensus and never imposed unilaterally. ILO was founded to build, not to destroy.

Standards setting is also key to reduce the threat to the governments’ authority and to the social cohesion that are undermined by trade treaties negotiated in secret. Treaties intended to benefit the few in detriment of the 99%.

Technology has the potential to improve the quality of life of millions of people, but a future that relies only on technology has no future. If robots and machines are cheaper than workers, and they certainly will not go on strike or claim for better working conditions, they will never buy mobile phones, cars, or the new spring-summer collection. They will not buy food or eat in fast food chains. Let’s use technology to alleviate working conditions for humans and let workers have a better life!

Again, the ILO can play a great role.

PSI welcomes the news that draft ISO 45001 has been rejected by ISO Member Organizations. Now it is time for the ILO to create a new international standard on occupational health and safety management systems with its tripartite constituents, to prevent the deaths of thousands of workers every year.

Decent work is at the very heart of the 2030 Agenda – without living wages for all there can be no end to poverty. The ILO must be at the forefront to advocate for all aspects of decent work and a stronger role for social partners in the implementation of the sustainable development goals.

Privatization is not compatible with the 2030 agenda and PPPs have been shown to fail. We want unconditional criteria to ensure that private sector intervention is in line with the public interest, especially where public resources are used to support the private sector.

Three conditions are crucial to ensure decent work in the global supply chains. The primary social responsibility of companies should be to pay their fair share to the communities where they create their profit. Binding clauses, instead of voluntary due diligence, to ensure transparency of public procurement mechanisms and an integrated fight against corruption both in the public and in the private realms would be an effective protection of whistle-blowers.

Corporates can create added value only when regulated by strong democratic institutions. Let’s work together for an inclusive sustainable development.

Thank you for your attention.

The text of the speech is also available in French, Spanish and Russian