Solidarity with the Korean People’s Strike 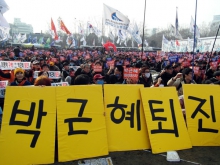 On 25 February 2014, the one year anniversary of President Park Geun-hye's administration, the Korean labour movement and other social groups held a "People's Strike" protesting the deterioration of democracy in South Korea.

Over 100,000 workers, farmers, urban poor and other Koreans from all walks of life gathered around the country to express outrage at the policies of the administration. Participants expressed their anger at government corruption and anti-democratic policies  including the repression of fundamental labour rights and unilateral pursuit of privatization in rail, healthcare and other public services, and cuts to the national pension system. 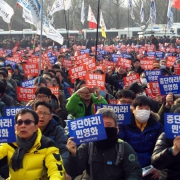 Public sector workers played a central role in the people's strike and used it to launch strong campaigns against attacks on the public sector. The Korean Government Employees' Union (KGEU), Korean Health and Medical Workers' Unions (KHMU) and Korean Federation of Public Services and Transportation Workers' Unions (KPTU) National Pension Service Branch all held pre-rallies to declare campaign plans, including national strikes later this year against. The KPTU-Korean Railway Workers' Union held a 24-hour strike against rail privatization and restructuring. The actions of February 25 signalled the beginning of an even stronger fight by Korean public sector workers' against the Park government's attacks.

International solidarity protests occurred in several countries, including the U.S., Japan and Turkey, and many PSI affiliates and other unions sent protests letters to the Korean government.

On 25 February 2014, one year after the Park government’s inauguration, workers and people in Korea went on a nation-wide strike under the slogan “After one year under Park’s Government, we cannot stand it anymore!”

For the last year, human and trade union rights have been seriously attacked and the democracy in the country has been deeply undermined. Almost all election campaign commitments made by President Park have been broken during her first year.

Ironically, this has made social movements much more united.  KCTU, together with broader social movements including organisations of peasants, the urban poor, small shop keepers, students, youth, etc., jointly established the “Organising Committee of 25 February 2014 People’s Strike” as a coordination body. On this day, workers and citizens gathered in Seoul and other major cities to raise the common demand of the people.

Strikes, rallies and protest actions are often criminalized in Korea. A strong show of support and solidarity from the international trade union movement is needed.

Please show your solidarity for workers in Korea now:

1.  Send the attached protest letter (see below) to the Korean government
2.  Send the Korean unions a photo of you and other union members with the attached picket signs  (Cc: kptu.intl@gmail.com and StopPrivatisation@world-psi.org)
3.  Sign the petition now for the ITUC LabourStart campaign