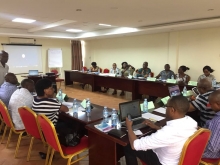 An Energy Network meeting in Kampala, Uganda, has issued a statement on the privatization of the energy sector in Rwanda. Union executives and members have been dismissed after being accused of lending support to the unionists and highlighting the government’s influence on the public in favor of privatization and against the unions’ anti-privatization stance.

The network is comprised of representatives from Kenya, Nigeria, Rwanda, Uganda, Ghana and the PSI Sub-Regional office. It has initiated emergency measures to support unionists in Rwanda after the dismissal of union executives and some 600 union members.

The Network calls on governments in Africa to provide adequate, reliable and affordable electricity to all citizens and demands for the reversal of all privatized energy utilities.

The network made the following statement:

1. That the Network offers to support Rwanda financially to establish a secretariat with at least two staff for the day to day running of the Union and recruitment of members. This will exempt them from paying subscription fees and contribution to the solidarity fund until further notice.

2. The Network condemns in totality the privatization of the energy sector and calls on the governments in Africa to provide adequate, reliable and affordable electricity to all citizens and demands the reversal of all privatized energy utilities back to the public and/or State.

3. The Network notes with regret, the deliberate effort by the private sector, politicians and the media to brand public energy distribution, generation and transmission institutions as inefficient, which has led to lack of public sympathy in the fight against privatization of the energy sector. It therefore; calls on the Unions to find effective and efficient ways of communicating; craft campaign messages that relate to the needs of the community and in a manner that ensures a common understanding of universal access to public services.

4. The Network notes with concern that in the process of privatizing electricity, governments, through the Power Purchase Agreements (PPAs) and other trade agreements have doled out tax incentives and other benefits to these companies at the expense of the tax payer. The Network therefore calls on the unions to develop strategic campaign plans to combat outrageous tax incentives to multinational companies and leverage on the PSI Tax Justice campaign in Africa and Arab countries.

5. The network condemns in totality energy generation using nuclear power as alternative source of energy being promoted by some African governments. The network therefore urges countries to choose other options of renewable energy generation such as solar, wind and geothermal which have less negative effects on the environment.

6. The Network urges governments to be conscious of the activities of the World Bank Group and other International Financial Institutions (IFIs) and focus on raising funds internally through effective revenue collection frameworks. It also urges unions to share information with each other and with Global Union Federations (GUFs), on the work of IFIs in their various countries.

7. That the Network agrees to lobby for a permanent seat and/or observer status at regional and sub-regional bodies: Common Market for Eastern and Southern Africa (COMESA), Economic Community of West Africa States (ECOWAS) and East African Communities (EAC) to influence policy decisions.