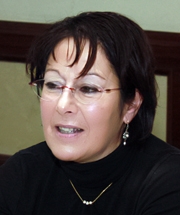 Rosa Pavanelli has made it her life work to relentlessly strive for the dream of the better world that we can build together, in solidarity.

Rosa – elected General Secretary with a resounding 72% of votes at the November 2012 World Congress of Public Services International – has held many local, national and international leadership positions in the labour movement.

She was an activist in the labour movement from an early age.

“Being a unionist is genetic for me,” says Rosa with a smile, noting that her father was a prominent trade union leader with the Italian General Confederation of Labour (CGIL).

If union activism is in her genes, it’s clearly also in her heart.

In high school, she was active in the student movement, which worked closely with trade unions.

On 28 May 1974, when Rosa was 18, unions in her home town called a general strike to protest fascist attacks on students and union leaders.

“There were 50,000 people at the demonstration in the town square. A bomb exploded. Twelve people were killed, including all the local leadership of the education branch of CGIL and one of my teachers. Another 150 people were injured.

Rather than looking for those responsible, the police interrogated all members of the communist party.

“Many decades later, we now know that fascist members of the secret service planted the bomb. Many of the killers are still free and living abroad.”
Rosa has mourned the loss of friends and associates, but has never been deterred from the struggle for trade union rights.

After a series of precarious jobs, Rosa was hired under a youth employment programme run by the Ministry of Labour in 1978. Typically, she refused to join the bogus house union, and started organising other young people to join CGIL.

In Italy, Rosa was a leader in the struggle to win collective bargaining rights for public service workers – a campaign that was also marred by violent attacks against trade unionists and allies.

“This was really a revolution in labour law, a great achievement for public sector workers. But the architect of the law, Massimo D’Antona, was assassinated outside his home in 1999 while we were waiting to have a meeting with him,” Rosa recounts.

As the head of the public services union FP-CGIL, Rosa worked with a broad social coalition on the 2011 national referendum in which 95 percent of Italian voters rejected water privatization, impunity for Italy’s president, and nuclear power.  She is also proud of the professional and community support that FP-CGIL and its members provided in the wake of recent devastating earthquakes in northern Italy.

Rosa has also been active in international solidarity work with unions in Brazil, Nicaragua, El Salvador, Guatemala, Uruguay.  In India, Rosa has long supported the Self-Employed Women’s Association (SEWA) which is a registered trade union.

After her first months as General Secretary of Public Services International, Rosa says there is no doubt that the challenges facing public sector workers are getting more difficult.

“The forces working against ordinary people – the privateers, international financial institutions, right-wing billionaires and captive governments – are ruthless and powerful. They destroy. They care nothing for the public good. They are driven by self-interest and insatiable greed. Women, young people, workers and families are paying the price as unemployment soars and vital public services are slashed.

“Neoliberalism, which is driving austerity, is an outrageous ideology. You can’t build a healthy community by driving your neighbours to ruin,” says Rosa.

Rosa is undaunted by the scale of the challenges unions face.

“Our movement has a long and proud history of overcoming adversity, and winning against seemingly impossible odds.

“My personal style is to build through consensus, cooperation and solidarity.
“The PSI’s financial resources and staff are tiny compared with those of our opponents, but we must be ambitious. We must dare to increase our membership, build our power, and strengthen our influence at the local, national and international levels. Together we’re strong. Together we can improve the lives of our members and families, and help shape a world where the goal is advancing the common good, not catering to the greed of the few,” she says.

“I look forward to working with every PSI affiliate, in every corner of the world, to build strong and healthy communities, improve the quality of public services, and ensure that every worker is treated with respect.”