The right to strike re-affirmed at the ILO 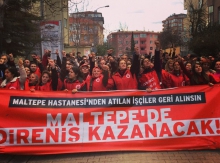 After more than two years of conflict, the right to strike was re-affirmed at the International Labour Organization on 25 February during the Tripartite Meeting on the Freedom of Association.

Employers brought the ILO’s supervisory mechanism to a standstill by challenging the existence of an international right to strike and the authority of the ILO. This conflict also endangered decades of ILO jurisprudence on the right to strike.

Sharan Burrow, ITUC General Secretary, said, “Having created the crisis, employer groups and some governments were refusing to allow the issue to be taken to the International Court of Justice even though the ILO Constitution says it should be. We have now managed to negotiate a solution which protects the fundamental right of workers to take strike action, and allows the ILO to resume fully its work to supervise how governments respect their international labour standards obligations.”

Steve Cotton, ITF General Secretary, commented, “There is no doubt that without the huge mobilisation efforts of the global union federations and trade union organisations worldwide, the basic human right to withdraw your labour could have been removed. It is down to all of our efforts that the attempt was defeated – and it will be down to all of us to ensure that it is protected."

Outcome document of the meeting: Tripartite Meeting on the Freedom of Association and Protection of the Right to Organise Convention, 1948 (No. 87), in relation to the right to strike and the modalities and practices of strike action at national level