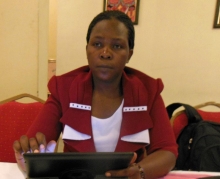 My name is Everline Aketch. I am a member of the National Union of Educational Institutions (NUEI) in Uganda. I joined Kisiki College Namutumba, a government supported secondary school in 2000 as an Assistant Bursar.

One of my first responsibilities was to represent the support staff.  I was quite excited, but had to bring along my one-year old baby to attend a rank and file training that was organized with PSI funding. The meeting lit a flame that ignited my desire for justice and equitable treatment in the workplace.

Little did I know that my test would follow a few years later. In 2005, the school administration proposed to lay off some workers. The administration claimed that they were incompetent. I engaged with the administration and told them that unless there was hard evidence to demonstrate unsatisfactory performance, the law would not allow them do that.

A few months later, one of the cleaners became seriously ill with tuberculosis. The management reached a decision that it was unhealthy to keep such a worker among the student community and university workforce. Once again, I engaged with the administration to negotiate an opportunity to seek additional medical attention for the sick worker. After his treatment they would decide if he was still unfit for the community on health grounds. This was accepted, though begrudgingly. I was already slowly gaining the name of the “Union Girl.” Gladly, after some three months the worker fully recovered and was able to go back to his position as a cleaner.

In August 2005 the students went on strike. There were early warning signs that the administration had chosen to ignore. The head teacher was hurt in the scuffle and subsequently the deputy had to take charge. Little did we know that there were plans to terminate some of the support workers on claims that they had instigated the strike. This claim was totally false. Letters were prepared showing termination of their contract and I was lucky enough to be informed. I approached the head teacher and informed him that the law requires that the workers are given a fair hearing by appearing before the Board of Governors before their services are terminated.  These were precariously employed workers with minimal job security. I informed him that if the school went ahead and issued the letters, I would have no choice but to take up the matter with the Board of Governors, as they were the appointing authority. I referred to the Board of Governors Act that governed how the school should operate, including treatment of workers employed by the Board and not on the government’s payroll. The head teacher and his deputy became angry and said, “That is why we do not like these trade unionists. They always cause trouble.” However, the good news was that they reversed the decision and the workers retained their jobs since there was no evidence that they had instigated the strike. After many more support worker struggles, the head teacher often referred to the support workers as “Everline Aketch’s workers.”

Support workers face tremendous disadvantages in Uganda given their low levels of education. They are not able to defend themselves against false allegations. The times I felt really happy  and glad that I was a trade unionist was when I saw the gratitude in the eyes of these workers who were about to lose their jobs and were even sometimes falsely accused. The sigh of relief when being told that they were safe was worth all the effort and labels. I am glad that all of them were able to keep their jobs and some were able to retire voluntarily after serving this institution for close to twenty years. As a trade unionist, what vexes me most is when someone who does not have the capacity to defend themselves is a victim of injustice. Sometimes they are not even given the chance to defend themselves.

Not long ago, all the support workers at public universities went on strike. The services in the universities came to a screeching halt.  Admission letters could not be issued to new entrants. The washrooms were left dirty.  One of the lecturers and a Vice Chancellor conceded, “Support workers are as important as their teaching counterparts.”