Report: Protecting the Public Interest from Predatory Privatization and Outsourcing 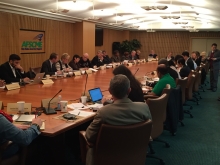 A Public Services International Leadership Meeting held on 2-3 December 2015 in Washington, D.C. USA and hosted by the American Federation of State, County and Municipal Employees (AFSCME). The objective of this PSI leadership meeting was to explore ways to work together to strengthen the fight against the global push for privatization, linking national campaigns to regional and global dynamics.

The meeting was hosted and held at the American Federation of State, County and Municipal Employees (AFSCME) located in Washington, D.C.

The objective of this PSI leadership meeting was to explore ways to work together to strengthen the fight against the global push for privatization, linking national campaigns to regional and global dynamics.

Lee Saunders, President of AFSCME (USA), opened up the meeting by identifying four factors that are critical to the success of our campaigns against privatization, including: organizing members, educating members and the community, mobilizing members and the community, and working with community partners to build a community supporting public services and opposing privatization and outsourcing. He pointed to the Taxpayer Empowerment Agenda and the work of In The Public Interest as models for moving forward.

Rosa Pavanelli, General Secretary of PSI, pointed to the increasing political attacks on public sector unions as a strategic element of the corporate push for privatization and noted that the politics behind privatization undermine the recently established United Nations Sustainable Development Goals (SDGs) and the global fight against poverty. She challenged participants to draw upon their personal experiences in campaigns to stop privatization to collectively develop a truly global strategy.

Dave Prentis, President of PSI and Secretary General of UNISON (United Kingdom), reported on the current government’s efforts to roll back the public health delivery system through privatization.  He detailed UNION’s response to such challenges, including the deepening engagement of the union with its members and efforts to learn from members’ experiences to further develop campaigns and strategies to organize the membership and fight privatization.

Richard Amparbeng, General Secretary of the Public Services Workers’ Union of TUC (Ghana) explained his country’s experience with the privatization of electricity generation – transmission -- distribution (GTD). Erin Polaczuk, National Secretary of the New Zealand Public Service Association (NZPSA) spoke of New Zealand’s past experiences with privatization and neoliberal reform of governance. Mette Nord, President of the Norwegian Union of Municipal and General Employees (NUMGE) of Norway detailed her country’s social care programs and the threat of privatization. Isolde Kunkel Weber, Vice-President of Ver.di, explained the evolution of the movement to “remunicipalize” public utilities in Germany. Héctor Ruebén Garcia of Argentina and General Secretary of the Municipal Workers Confederation spoke of the labour movement’s recent experiences with strengthening public services and the role of the state in the national economy.  Karen Batt, Federal Secretary of the Community and Public Sector Union (CPSU-SPSF) of Australia, explained her union’s efforts to reach out to members and the campaign to “name your employer” to emphasize community support for the public sector.

Randi Weingarten, President of the American Federation of Teachers (AFT) of the United States concluded, “Let’s be real. There is nothing wrong with economic growth and smart business strategy, but there is something wrong when growth and strategy includes the degradation of workers, the pillaging of communities and the harming of the public good.  We can turn back the tide of privatization when we make a choice to work with community, educations and environmentalists to push for greater transparency and more corporate accountability.  And that works starts today, right here and right now!”

Juan Ayala Rivero, President of the Federal District Government Workers Union (SUTGDF) of Mexico detailed his union’s efforts to “follow the work” in the Federal District by establishing a “right to unionization” law for all private sector workers involved in the outsourcing of the district’s public services. Annelie Nordstrom, President of the Swedish Municipal Workers Union (Kommunal) and President of the European Federation of Public Service Unions (EPSU), reported on-going efforts to privatize Sweden’s welfare and safety net services and spoke of the concept of guaranteeing an “ethical care” framework for all citizens. Ritta Thandeka Msibi, Deputy President of the Democratic Nursing Organisation of South Africa (DENOSA), shared her reflections on South Africa’s bitter inequality and the critical role of public services in rectifying inequality and poverty alongside dubious privatization experiences that only serve to strengthen private sector firms.

Mark Hancock, President of the Canadian Union of Public Employees-CUPE (Canada) spoke of the rise in privatization efforts under the former federal government of Prime Minister Harper and CUPE’s staunch efforts to roll back water privatization. Toby Sanger, CUPE’s chief economist, indicated the need to develop and distribute model collective bargaining language with advance notice of privatization efforts. Jesus Gallego Garcia, International Secretary of Spain’s Federation of Public Services (UGT) spoke of the privatization of public hospitals and the degradation of service quality.  Larry Brown, Secretary-Treasurer of National Union of Public and General Employees-NUPGE (Canada), reported the increasing use of public sector pension funds to finance privatization projects, such as public – private partnerships (PPPs), and companies whose business model seeks to privatize and outsource public services. Hiroaki Aragane, Vice-President of the All Japan Prefectural and Municipal Workers Union (JICHIRO) spoke of the increasing outsourcing of public services in Japan and his union’s efforts to organize to fight privatization.

João Domingos Gomes do Santos of Brazil’s National Confederation of Public Sector Unions (CSPB) spoke of the increase in public service concessions and public-private partnerships in Brazil along with efforts to impeach the President and impose an austerity plan similar to Southern Europe. Thomas Kattnig of the Municipal Workers Union of Austria efforts to oppose the recent trade agreement negotiations (CETA, TTIP) as instruments to facilitate the privatization of public services. Michael Filler of the Teamsters (USA) also reported concern over the U.S.A. negotiated trade agreements (Trans-Pacific Partnership and TTIP) and the probably impacts, including the opening up of public services to privatization. Candice Owley, Vice-President of the American Federation of Teachers (AFT) and PSI Co-chair of the Inter-American region, noted the experience of the state of Wisconsin (USA) and how political attacks on public sector unions go hand in hand with efforts to privatization, but under the guise of cutting the budget and taxes.

All of the participants offered their perspectives and suggestions for moving the fight against privatization forward.

The meeting also included discussions with representatives from the International Monetary Fund (IMF), the World Bank, and the United States government (Treasury, Labor, and State Departments). These discussions focused on the IMF’s and World Bank’s policies and programs that often support and evaluate privatization schemes, including public-private partnerships.

The Deputy Director of the IMF’s Fiscal Affairs Department, Sanjeev Gupta, explained his framework for advancing the efficiency of public investment and the delivery of public services, including national fiscal surveillance and the publication of the Fiscal Monitor. David Coaty, Chief of the Expenditure Policy Division of the IMF, explained his role in advising national governments under fiscal duress as well as the evaluation tools developed by the Fiscal Affairs Department, including PIMA (scoring the efficiency of public investment) and the P-FRAM (scoring public-private partnerships).

William Dorotinsky from the World Bank and a principal advisor to the president on issues related to governance shared his vision of how the World Bank is evolving under its current structure and mission to eliminate extreme poverty. Dorotinsky encouraged PSI to stay engaged and consult regularly with bank officials and managers.

Meeting participants questioned these speakers and shared their historical perspectives and relevant national experiences.  Guests from the IMF, World Bank, and U.S. government welcomed the engagement and encouraged PSI to deepen consultations on a broad range of issues.

Meeting Outcomes and Next Steps

Throughout the two-day discussions, participants openly reflected upon their experiences and offered suggestions to build and share tools and strategies for fighting privatization at all levels. Participants agreed that PSI should develop an anti-privatization toolkit that can be shared with affiliates and PSI partners around the world. Participants agreed that such a toolkit should include sample collective bargaining language to mandate advance notice of privatization efforts and allow for unionization that “follows the work.” Also, the toolkit should include communications and media related tools that assist affiliates with targeting audiences with specific messaging campaigns. The toolkit could also feature company/sector-based data for understanding the evolving privatization business models and developing effective counter-strategies, such an effort might also intersect with PSI’s on-going work on pensions, trade agreements, and taxation as well as across the many PSI sectoral networks.

Moreover, participants agreed to share information, analyses, and publications that could strengthen our collective, global efforts to fight privatization and outsourcing; and that such efforts could contribute toward the establishment of a virtual PSI privatization clearinghouse or observatory to more effectively compile and distribute critical information, news clippings, analyses and documents. Donald Cohen, Executive Director of In The Public Interest noted the possibility of working together to expand this work globally. Lastly, participants agreed that PSI should investigate the possibility of developing and launching a global privatization campaign that emphasizes the inefficiencies and anti-democratic nature of privatization and outsourcing.

Given the discussions and points of agreement among the meeting’s participants, PSI General Secretary Rosa Pavanelli will advance the following lines of work: