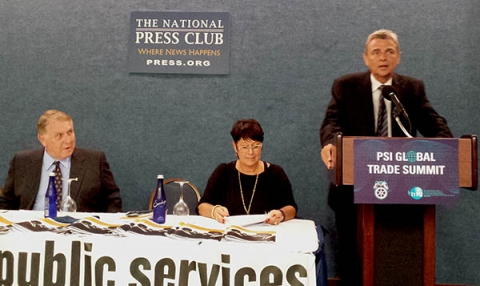 On the first day of the Public Services International (PSI) Global Trade Summit 2014, in Washington, D.C., union leaders from all over the world discussed with the media the growing concerns about the effects of public service trade policies.

“These trade agreements are about far more than trade," says Rosa Pavanelli, general secretary of PSI.

"They enshrine the power of corporations in ways only loosely related to trade. They lock in liberalisation, promote privatisation, and restrict governments' right to regulate. The global financial crisis made clear the catastrophic results of failing to adequately regulate the financial markets.”

“We need to start to look at the way negotiations are taking place, which is in complete secrecy,” says Dave Prentis, president of PSI and general secretary of UK's UNISON.
“How can a democracy work in secrecy, when the politicians themselves are not allowed to see what is being talked about, when the only people who can comment are the big businesses, the multinationals who will take advantage of it? How can we let that happen?”

According to Teamsters general president James P. Hoffa, “trade agreements such as TISA, TPP and others will have a detrimental impact on public sector jobs and services in the U.S. and across the world.
“The Teamsters union and the other unions represented at this summit oppose trade deals that threaten service sector workers just as we always have for workers who produce goods that families rely on.”

During the summit, PSI released a new research document about the Trade in Services Agreement (TISA), "The really good friends of transnational corporations agreements".

The report aims to show the regulatory system behind the new agreement, that imposes irreversible deregulation in various sectors, from healthcare to education, from financial services to data and communication.

On Wednesday 17th September, Hoffa, Pavanelli and Prentis will lead participants in lobbying members of the U.S. Congress, concluding with a press conference in the U.S. Capitol Visitors’ Centre.