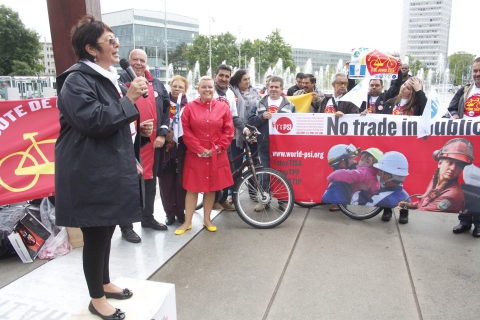 Led by members of the global union federation Public Services International (PSI), trade union leaders from around the world joined in a ‘Route of Shame’ on Wednesday 4 June to call for the right to strike for all workers and shame countries that consistently violate workers’ and trade union rights, in Geneva and 10 other cities around the world. PSI affiliates organised ‘Route of Shame’ actions in Argentina, Bangladesh, Chile, Guatemala, Indonesia, Japan, Paraguay, Panama, Peru and South Korea. PSI Youth Committees took the lead in Chile and Paraguay, whereas in Peru the action coincided with a day of national strike.

In Argentina, Guatemala and Panama, meetings were held with the national government and the missions of targeted countries. PSI Bangladesh affiliates organized a human chain before the press club in Dhaka to raise visibility for workers’ rights violations around the world.

Guest speakers along the ‘Route of Shame’ in Geneva included trade union leaders from Algeria, Belarus, Ecuador and South Korea– where independent trade unions are suppressed by the government, and from Guatemala – where dozens of public service union members have been assassinated in recent years.

We also heard how international solidarity contributed to collective bargaining rights being restored to United Nations’ workers. PSI also welcomed the participation and contributions of other global unions EI, IUF, ITF and INDUSTRIALL and the ITUC.

4th June was also the 25th anniversary of the massacre of the Tiananmen square, which we commemorated. No government has the right to repress and kill its citizens. The trade union movement calls for respect of human rights and workers’ rights for all, including for informal workers.

The ‘Route of Shame’ took place during the 103rd International Labour Conference (ILC) in Geneva. A major focus of the annual ILC is to determine whether countries are upholding their obligations to respect the rights of workers and their trade unions under International Labour Organization conventions. Countries of specific concern include: Algeria, Egypt, Swaziland, Turkey, Greece, Portugal, Spain, Croatia, Georgia, Canada, Guatemala, Ecuador, Paraguay, Peru, Honduras, Columbia, South Korea, Bangladesh, Cambodia and Indonesia.

While some countries are exporting their anti-social and anti-workers models, global supply chains and secret trade agreements are also pushing workers’ rights out of reach for millions of workers. This race to the bottom has to stop. People’s lives are worth more than profits!

It is not by reducing workers’ rights that we will overcome the current crisis. We strongly refute the suggestion that limitations to collective bargaining are acceptable in any circumstances and we call on governments and employers to act in good faith.”

Pavanelli further says, “Too many governments prefer to act in the interest of the few, and that is why inequality is rising at an ever faster pace all over the world. We need investment in decent working and living conditions, supported by quality public services. We claim the right to strike for all workers, in both the public and private sectors. All workers are entitled to social protection and a decent wage and working conditions. Traditional methods of engaging in global policy setting are failing to produce substantive results for human rights. We stand with the millions of workers who struggle for their rights and do not give in. International solidarity makes us stronger.”