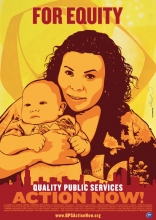 Human Rights Day is commemorated on 10th December to mark the date the United Nations General Assembly adopted the Universal Declaration of Human Rights, proclaiming its principles as the “common standard of achievement for all peoples and all nations”. Human rights are indivisible and cover political, civil, economic and social rights.

Public Services International mourns and honours Nelson Mandela, one of the most recognizable human rights advocates of the twentieth century, a man whose dedication inspires people throughout the world. Mandela’s life epitomized the fight for freedom, equality, and justice, all core human rights ideals. Nelson Mandela said: “Just and lasting solutions to the problems of humankind can only come through the promotion of democracy worldwide…To deny people their human rights is to challenge their very humanity».

This year marks the 20th anniversary of the creation of the Office of the UN High Commissioner for Human Rights. In these twenty years, our understanding has evolved significantly concerning the challenges to implementing human rights for all, especially in relation to poverty, racism and migration. At the same time, the private sector – including financial institutions, multinational and other business entities – is taking a growing role in delivering or mediating human rights.

We are seeing accelerating privatization of public services around the world. We are witnessing how big business is actively appropriating common goods and public interests. Putting corporate interests before all others will have a major impact on generations to come. Though trade agreements include clear references to human rights, these clauses are not applied in real terms.

Impunity continues at all levels, so that those who commit human rights crimes escape accountability for their deeds. Contraventions of human rights include discrimination on the basis of gender, age, and sexual orientation, crimes of corruption, tax evasion and economic mismanagement, and the refusal to recognize trade unions and collective bargaining.

The right to collectively bargain is recognized by Article 23 of the Universal Declaration of Human Rights; this identifies the ability to organize trade unions as a fundamental human right. PSI is outraged over the actions of the United Nations and its Secretary General Ban Ki-moon for disregarding the legal collective bargaining rights of its own staff.

Public Services International works to end impunity in cases of violence against trade unionists around the world, from Guatemala to South Korea. PSI General Secretary, Rosa Pavanelli, says: “We call for social and economic rights and justice through collective bargaining and freedom of association, and we call for an end to the senseless privatization of public services that fuels inequality and corruption”.

Hand-outs and subsidies to the working poor will not solve poverty – only decent wages will. Most low-income countries lack even a minimum living wage. In a majority of high-income countries the economic crisis and accompanying austerity measures have had a major impact on women, young people and migrant workers – many of whom are being pushed into precarious employment.

We say NO to austerity which is an outright attack on human rights, and we call on the international institutions to recognize how severely austerity has undermined human rights. In the past five years, austerity measures have rolled back generations of social progress and increased inequality and social exclusion.

PSI calls on all of our affiliates to demand funding for equality policies and more investment in public education, social and health services. We are committed to achieving human rights, supported by quality public services, for all people.