From public sector worker in Portugal to cleaner in Switzerland 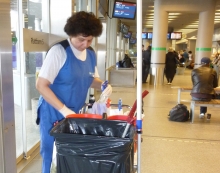 As protests against austerity measures spread in southern Europe, more and more people hit by the crisis are moving north in search of decent jobs. Ana, a 50-year-old Portuguese moved to Switzerland to work as a cleaner and caretaker.

(ILO News) – We meet Ana B. – a 50-year-old Portuguese woman – at a café in a Swiss city. Ana has been living in Switzerland for about six months. She moved here to work as a cleaner and caretaker.

But Ana is no ordinary cleaner. She is a secretary at a government agency in the Portuguese city of Porto who took a one- year career break to come to Switzerland for a job that would allow her to pay her bills back home.

“I am a single mother and my 20 year-old son is still at university. I am also still paying for the flat I bought in the outskirts of Porto a few years ago. My salary as a public sector worker in Portugal was only 700 euros a month. But with the economic crisis and the austerity measures that followed, salaries have been frozen…,” she said.

When a Portuguese friend told her about a cleaning job in Switzerland and how much it paid, she quickly realized that she would more than double her salary by accepting the offer.

“Since the possibility of taking a career break is one of the 'benefits' the government agency I work for has not as yet cut, I decided to move – even if it’s only for a year,” she explained.

It was not an easy choice. She misses her country and regrets not being able to see her son. “Thanks to the internet, we still keep in touch almost every night,” she added.

To save the extra money she makes, Ana decided to live in a hostel mostly occupied by younger people: “At the age of 50, I would certainly rather stay at home. But I want my son to be able to graduate from university… Even if it means losing part of my social status,” she said.

Public sector workers hit by austerity
Ana’s story is certainly not unique. And she is probably much better off than those who have become economic migrants because they have no job at all.

What her decision to leave Portugal shows, however, is that even public sector workers – and the middle class in general – are being hit by the crisis.

“Ana’s story partly illustrates the increasing difficulties that public sectors workers face since the beginning of the crisis,” said  Daniel Vaughan-Whitehead, who is currently working on a book about how the crisis affected public sector workers.

“Many of them – especially in southern and Eastern Europe – have to deal with frozen wages, benefit cuts and the lack of promotion opportunities. Portugal is one of the most affected countries by austerity measures,” said Vaughan-Whitehead.

“Working poor in the public sector is a new phenomenon in Europe,” he added.

Vaughan-Whitehead explained how deteriorating working conditions (such as higher intensity at work, more overtime but less pay) are also leading to a dramatic decrease in the quality of public services. He attributed this trend to staff shortages caused by the lack of new recruitment – while the demand for services has increased.

“This also contributes to people turning to alternative solutions, which are hard to find because the private sector is no longer recruiting as it used. Women are particularly affected.”

In about six months, Ana is supposed leave Switzerland to go back to her old job in Portugal. But she is already looking into whether or not her career break could be extended for another year.

“If having enough money to live means working as a cleaner here instead of as a secretary in a comfortable office back home, I am ready to do that for an extra year,” she said.