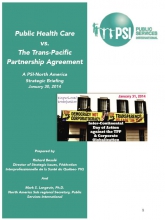 This strategic briefing identifies and examines the primary threats associated with the TPP as they relate to public health care and the essential workers who deliver this vital public service. The first section treats the core negotiating issue of trade in services with a focused discussion of its consequences for public health, such as contracting out health care services and government procurement of medical devices and pharmaceuticals. The second section examines the key issue of the “negative list” through which participating national governments identify a list of services to be exempt from the Trade in Services provisions of the TPP. The third section treats the cross cutting issues of competition rules and  state owned enterprises (SOEs) as they may impact public health care institutions. All of these concerns are exacerbated by the expected inclusion of investor-state dispute settlement provisions that allow foreign investors to directly attack important government policies aimed at protecting public health. Lastly, the briefing outlines several recommendations for PSI affiliates to consider. In addition, Appendix 1: TPP Member Country Ratification of Core Labor Conventions offers a review of TPP country ratification of core labor conventions.