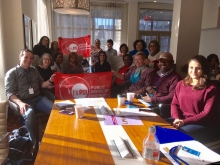 Union women from around the world attended the 62nd session of the Commission on the Status of Women (UNCSW62), which took place at the United Nations Headquarters in New York from 12-23 March 2018.

CSW62 came to an end with governments developing a set of Agreed Conclusions that fail to address the major threats facing rural women yet can be considered a defensive achievement in a global climate of regressive, patriarchal attacks on women’s human rights. When governments last addressed the theme of rural women’s rights in 2012, they failed to reach an agreed outcome, which in turn makes this year’s conclusions appear an achievement, despite the reductive result.

Trade unions and feminist organizations made various proposals and lobbied for transformative policy concepts prior to and during the negotiations. While feminist groups felt that much was achieved in relation to sexual and reproductive rights, in spite of the global backlash and presence of deeply conservative forces, much less was achieved in relation to economic rights, including labour rights. The UN expert group report, developed to inform the CSW, recommended addressing the structural barriers created by neoliberal economic policies, including trade agreements, corporate power, privatization, land-grabbing, tax evasion and avoidance and climate change. These were either deleted or dealt with in a cursory, reductive manner.

Some of the key outcomes covered in the agreed conclusions include:

Reflecting on both the outcomes and the process of CSW62 will help PSI and affiliates prepare for next year’s important negotiations focused on “Social protection systems, access to public services and sustainable infrastructure for gender equality and the empowerment of women and girls”.