PSI Statement on the Situation in Zimbabwe 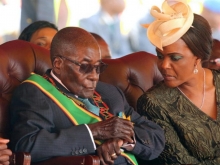 With Robert Mugabe’s resignation Zimbabwe needs immediate, internationally-monitored free elections where voter safety is assured. Those family members and acolytes whose criminal corruption mushroomed under Robert Mugabe should be excluded as candidates.

The developments in Zimbabwe are an intensification of the deep political crisis the country has experienced for close to two decades. The active involvement of the military in a self-styled attempt to stabilize the political and economic situation can only be described as a coup. PSI holds fundamentally to democratic principles and we oppose any unconstitutional change of government, whatever the supposed merits.

Zimbabwe under Robert Mugabe was a by word for kleptocracy, wasted opportunity and corruption. An entire generation has been deprived of social development and subject to repression due to the arrogance and criminality of the President and his entourage. He presided over the decline of a once promising economy that has devastated the lives of millions of people. Workers in Zimbabwe have endured some of the toughest conditions possible.

Having earlier used the entire state apparatus to avoid the loss of power in elections, Robert Mugabe long ago lost any legitimacy as President of Zimbabwe. It was a post he maintained through fear, ballot-rigging, intimidation and oppression, and it is long overdue that he leave politics altogether.

Thankfully, the move by the military was endorsed by the massive crowds, among them workers, that marched in Zimbabwean cities calling for a new era. With Robert Mugabe’s resignation Zimbabwe needs immediate, internationally-monitored free elections where voter safety is assured. Those family members and acolytes whose criminal corruption mushroomed under Robert Mugabe should be excluded as candidates.

Yet, even with Robert Mugabe’s departure, the state structure of corruption and repression remains in place. The same kleptocrats who prospered under Robert Mugabe’s tutelage could stay in power. The same dysfunctional economy stands at an idle where public services, in the 1980s the very best in Africa, have been devastated and left decrepit.

The great challenge that now confronts public services trade unions and the labour movement more generally is this: what way forward? The inevitably coming ideological attacks from the IMF and the World Bank on state institutions as indubitably corrupt must be resisted with a union response that seeks to rebuild democratically-controlled quality public services. Divisions in the labour movement, frequently sponsored by the cronies of Mugabe, must now urgently be over-come and a united platform for democratic control reinvigorated.

Internationally, the trade unions in other countries must, with unstinting realism, resist the illusion of a false dawn ushered in by Robert Mugabe’s fall from power. In far too many countries the end of dictatorships in the last 30 years has ushered in periods of intensified neoliberalism and ersatz democracy, with state assets flogged off at bargain prices to the same criminals previously in control. Far too often, public services have not been expanded, but rather out-sourced and diminished.

The workers and people of Zimbabwe need a strengthened movement actively mobilising for justice – not just political, but social and economic. PSI stands in solidarity with our affiliates and all the workers in Zimbabwe who seek to build that movement.