PSI participates in 144th Executive Board Session of the WHO 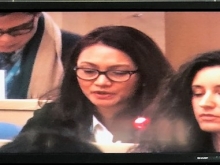 A seven-person delegation from Public Services International (PSI) took part in the 144th session of the World Health Organization (WHO) Executive Board which took place in Geneva from 24 January to 1 February. The PSI delegation intervened on five crucial items on the agenda.

PSI was accorded official relations as a non-State actor with the WHO by the 142nd Executive Board in January last year. This allows us to participate in the governing bodies of WHO such as the Executive Board sessions, the World Health Assembly and meetings of the WHO Regional Committees.

The WHO Executive Board has 34 technically qualified members who represent WHO Member States and are elected for three-year terms. Other Member States can join the Board’s deliberations, and non-state actors in official relations with the WHO, like PSI, are invited to submit written statements on agenda items.

In his report to the Executive Board, the WHO Director-General, Dr. Tedros Adhanom Ghebreyesus declared that the mission of the WHO under his leadership is “to promote health, keep the world safe, and serve the vulnerable”. The first step towards this is the 13th WHO General Programme of Work (2019-2023). The ambitious targets at the heart of this plan of work are: “1 billion more people benefitting from universal health coverage; 1 billion more people better protected from health emergencies; and 1 billion more people enjoying better health and well-being.”

The PSI delegation intervened on five crucial items on the agenda: “Implementation of the 2030 Agenda for Sustainable Development”, “Primary health care towards universal health coverage”, “Health, environment and climate change”, “Human resources for health” and “Promoting the health of refugees and migrants”.

On the implementation of the 2030 Agenda for Sustainable Development, PSI pointed out that, while some progress had been made towards meeting the targets of the Sustainable Development Goals, “much more progress will be made with a reform of the global economic architecture”. As far back as 1978, Member States of the WHO called for a New International Economic Order at the historic Alma-Ata Conference, as a necessary step towards achieving “health for all by 2000”.

Two decades after the year 2000 target set at Alma Ata, health for all is yet to be achieved. The entrenchment of a neoliberal world order which puts profit before people has resulted in the commodification of health. We must now curtail global health companies’ influence on international health. We need to establish a new order which puts people over profit and allows the right to health for all to become reality.

On primary health care (PHC) towards universal health coverage (UHC), PSI welcomed the WHO’s renewed spirit “to deal effectively with current and future health challenges” and its people-centred approach with “emphasis on tackling the determinants of health”.

We added that this reinvigorated vision of the WHO should encourage fiscal justice. To enhance domestic resource mobilisation for PHC, multinational corporations have to pay their fair share of tax, while low- and middle-income countries should be spared the burden of international financial institutions’ “fiscal consolidation” conditionalities.

Speaking on health, environment and climate change, PSI called for urgent action in the light of findings of the Intergovernmental Panel on Climate Change (IPCC) recent special report on “Global Warming of 1.5°C”

Calls for funding of action on environmental health and climate change must take into consideration inequalities in wealth across regions. Countries and companies contributing to global warming must pay their fair share for our collective action to mitigate climate change, in line with the principles of social and generational justice.

In our intervention on Human Resources for health (HRH), PSI welcomed the launching of the International Platform on Health Worker Mobility (IPHWM) in October last year. The Platform was developed through dialogue and cooperation among WHO Member States, international agencies and stakeholders, such as employers, professional associations and trade unions. It is also part of the collaboration between WHO, the Organisation for Economic Cooperation and Development (OECD) and the ILO to implement the resolutions of the 2016 United Nations High-Level Commission on Health Employment and Economic Growth.

PSI will be building on these arguments at the World Health Assembly on 20-28 May 2019. It will also be an opportunity to deepen relations with civil society organisations and coalitions committed to the struggle for universal public health care such as the People’s Health Movement (PHM) and the Geneva Global Health Hub (G2H2) in the series of CSOs meetings that precede WHO Governing Body meetings.