PSI is deeply saddened by the death of former Deputy General Secretary, Alan Leather who died on 3 March 2019, after a long illness. Alan will be sorely missed. His death is a personal blow to many people around the world, the international trade union community will remember his name for years to come.

It is with great sadness that I inform you of the death of Alan Leather, former PSI Deputy General Secretary. Alan died at the age of 77 on Sunday, 3 March 2019, after a long illness. He leaves grown children Jack and Amy and countless trade unionists, social justice activists and thespians across the globe with nothing but love, respect and good memories. Alan was a gifted man who always brought out the best in people, inspiring with his optimism, sincerity and good humour. People were drawn to Alan. Many union leaders in PSI and across the labour movement will remember Alan helping them. 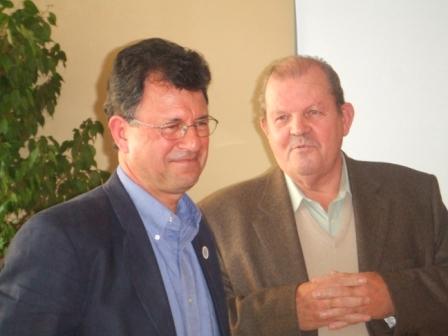 When Alan joined PSI in 1987 as Education officer, he brought a wealth of experience and his unique sunny disposition. Says Tim Beaty: “He was an outstanding adult educator, and with the help of solidarity support organisations, he developed a network of talented PSI trainers that mirrored the regionalisation of PSI’s structures.” In the early ‘90s, Alan led efforts to integrate the unions of former Soviet republics into PSI and EPSU. This was gruelling but exciting work to which Alan applied all his skills. PSI opened offices in Bucharest, Kiev, Moscow and Prague. PSI affiliates in our North-East Europe constituency remember Alan as a “man of vast soul and inexhaustible energy… Alan was the Godfather of international affiliation...”

Alan became PSI Assistant General Secretary in 1993 and Deputy General Secretary from 1995 until his retirement in 2006. His tireless dedication to defend workers’ rights were reflected in the many missions he undertook, in lobbying governments in person and via the ILO. He led PSI’s health sector in the fight against HIV-AIDS and ensured that the concerns of health workers were heard.

It is impossible to list all of Alan’s achievements. There are countless stories about him, which will be told and retold for many years, for Alan was a convinced trade unionist and a fine human being.

His death is a personal blow to many people around the world, to the workers and unionists in the public services, to the staff who worked with him for many years and to the many trade unions he helped to build to their present strength.

Jack and Amy, we join you in sadness, but also in the joys and pleasures your father brought us all. Alan will be sorely missed, and the international trade union community will remember him for many years.

Letter from PSI General Secretary to all affiliates (.pdf)

Please share your memories and stories of Alan or express your sympathy and condolences by sending us an email at comms@world-psi.org. Messages will be posted on the PSI website.

Alan’s grown children Amy and Jack came to PSI office on 5 March to connect with Alan’s ‘other’ family.

“PSI was dad’s family”, they said “and we always felt welcome in the office, waiting for him while he finished some urgent work, in the evenings or on weekends.”

“Dad would call up and announce that friends from PSI were coming over… like when he called to say that Chaiwat from Thailand was coming with eight others, and they’d be there in half an hour… but not to worry, as they would cook dinner” for the Leather family.

Jack and Amy wanted to tell us how important PSI, its affiliates, its values and aims had been for their father. They saw evidence of PSI’s latest activities and concluded that Alan would have been very happy to see the political direction PSI’s work had taken over the last years.

Amy and Jack will organise a memorial ceremony in the French village where the family lived. Details will be shared as they become available.

"We are deeply stricken by Alan Leather's death. FPCGIL has worked with him in past and we had the opportunity to appreciate him. We join his relatives and PSI in sadness. Condolences from FPCGIL comrades."

"My deepest condolences to his close family and to Alan's trade union family. He was an inspirational leader on HIV-AIDS and so many more issues, and he will be sorely missed by the movement as well as his close friends and relatives."

"The National Health Workers ' Union of Liberia ( NAHWUL ) is saddened by the shocking news of the death of a HERO, comrade Alan. Our deepest condolences to his family, PSI and the Trade Union Movement of the world. Rest in peace Alan, your memories, definitely, shall live on."

"Please accept my deepest and heartfelt condolences on the passing of your colleague, Mr. Alan Leather. May God bless and comfort his family and beloved ones during this difficult period."

"There’s no word that can express how sorry we are to hear about the death of Alan. During this difficult moment, our thoughts and prayers are always with each of you. Alan was a very thoughtful and wonderful person, we will always miss him! R.I.P. Alan Leather!"

“Please accept my condolences on the passing of Alan Leather. He was not only a special person and leader for PSI, but also for the international trade union movement. Alan had a broad vision and was always seeking cooperation with other GUFs and the ICFTU and TUAC. In fact, the first inter-global union group formed, long before the creation of the Council of Global Unions (CGU), was the Global Unions AIDS Program (GUAP). That cooperation put the trade union movement on the map and made a real difference when it came to fighting HIV/AIDS. Alan very capably chaired GUAP for many years and donated many hundreds of hours to it as well as drafting Susan to lend us a hand. It was largely through his efforts that we had a coherent position and were able to act, together, to fight HIV/AIDS, but also the stigma that was too often felt by its victims. He was a good person, a good trade unionist, and a good friend.”

"I am writing on behalf of IndustriALL Global Union, to express our deeply-felt condolences to you at PSI over the demise of Bro. Alan Leather, former PSI Deputy General Secretary.  I did not have the pleasure and privilege of meeting him but some of my colleagues did meet him and worked with him, and they attest to his good disposition, hard work, and commitment to the struggle of the international labour movement, and in particular to public services workers worldwide. Bro. Alan Leather’s contribution to the labour movement is highly appreciated, and he will be sorely missed. Our hearts go out to all of you at PSI, and to Bro. Alan Leather’s family at this difficult time."

"May God rest the departed soul in eternal peace and tranquillity in heavenly abode and give strength to the bereaved families to sustain this heavy and irreparable loss. Amen."

"When I started in 1993 as ITF's first Education and Project officer, Alan introduced me to the work of international education of trade unionists in all sorts of countries and industries. Both me and the ITF and its affialites took advantage of Alans' experience. Later on we met several times by various occasions and he coninued to help me as my older brother. I am still thankful for his help and friendship. My sincere condolences for his family and colleagues."

Today died a good man and I lost a friend and a reference. Alan help me in my early days when I joined the European Youth Forum and stayed for a couple of weeks in Ferney-Voltaire. I always admired his solidarity, working capacity, his vision for the role of the trade unions in Europe, a good friend with the right words for every situation. I met him in Tallinn for the first time and from 2000 to 2006 and it was an honour to work with Alan in several seminars and meettings across Europe. I will always remember the time we spent and the songs we sang. Alan was a wonderful person, I will always miss him! Thank you, my dear friend, rest in peace Alan Leather.

Tiago Borges Rocha
Former Head of theinternationalDepartment of SINTAP (Portugal)
and member of the European Youth Forum, from 2000-2006

"I liked Alan. He was one of the good people."

Phil Bowyer
Former GS Communications International and DGS UNI Global Union
"The Health Workers Union of the Russian Federation expresses deepest condolences to the family and friends of Alan Leather. Alan will forever remain in our hearts as a true professional, sensitive and attentive to ordinary trade union members and their needs. Thanks to Alan, many trade unions in Central and Eastern Europe came to PSI, this is entirely his credit. it is impossible to describe all the merits of this person, it is impossible to express in words the bitterness of loss. Rest in peace dear friend and brother!"
Mikhail Kuzmenko
President of the Health Workers Union of the Russian Federation
"I am deeply saddened by the passing of Alan. As a member – and after the coordinator - of the Central and Eastern Europe Unit of the ICFTU, I was fortunate to work closely with him during the nineties and the first 2000’ years. Alan  was a true and dedicated trade unionist. Particularly during the field missions that we organised, we were alwayw happy to have him and to rely on on his support. He was a man of principle, but also a man with strong analytical capacities and easy contacts with all the members of the trade union family. He was also a very food friend, which will be deeply regretted by all of us."
Hubert Cambier
Former Head of the ICFTU CEE Unit
On hearing of Alan’s death, I immediately thought of a line used once by from a former employer and someone Alan greatly admired – Senator Ted Kennedy.  Early on in our friendship told me of his efforts working with a young Senator Kennedy to draw attention to the horrendous conditions among India’s rural poor.  When I think of Alan, I think of his family – Sue, and his children who I came to know through the tales of a proud father.  Countless workers and their families owe their lives to Alan and Sue for to their efforts to end HIV/AIDS, but chances are they will never know who to thank.  I have confidence the values of selfless service live on in Amy and Jack and this could very well be Alan and Sue’s greatest legacy.  That is why Kennedy’s words so quickly came to mind, “The work goes on, the cause endures, hope still lives, and the dream shall never die.”
Rob Lovelace
Former Senior Advisor, Global Unions AIDS Programme
Attachments