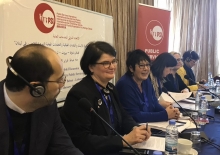 The event held in Beirut on 15 February discussed strategies to enhance refugee assistance in Lebanon, with a view to promoting access to decent work, social protection and public services. PSI General Secretary Rosa Pavanelli and union leaders from PSI Swedish affiliates (ASSR, Vardfordbundet, ST, Vision and Kommunal) attended the meeting alongside members from the General Confederation of Lebanese Workers, Ministry of Social Affairs, ILO and UNHCR.

“If we do not send a strong message that each human being has a human right - to dignity, to live in decent conditions, to have decent work, to access public services, we will not be able to defend the democracies of our nations, nor will we be able to address the fundamental root causes of injustice and inequality.”

This was the message conveyed by Rosa Pavanelli, General Secretary of Public Services International, during the PSI-organised Roundtable Discussion on “’Human Rights, Trade Unions and Quality Public Services for Refugees and Migrant Workers,” held in Beirut, Lebanon on 15 February.

Lebanon currently hosts around 1.5 million refugees from Syria, 20,000 from other origins and around 450,000 Palestinians, making it the country hosting the largest number of refugees vis-à-vis the size of the population. It is estimated that 1 in every 6 persons in Lebanon is a refugee.

While rich countries are closing their borders to migrants and refugees in need of protection, developing countries have opened their borders and are hosting 80% of the world’s refugees. This clearly shows a huge deficit in responsibility-sharing for the plight of refugees globally.

“We are not proud of either Sweden or Europe in these difficult times, when more people than ever are on the move, and Europe is building 'walls'. Our union is committed to an Open Sweden,” says Heike Erkers, President of the Swedish association ASSR (Union for Professionals in Social Sciences).

Erkers is part of the delegation of PSI Swedish affiliates who have come to visit Lebanon in the framework of the PSI Project on Human Rights, Trade Unions and Quality Public Services for Refugees and Migrant Workers. The Project is implemented by PSI affiliates in the MENA (Lebanon, Tunisia and Algeria) in partnership with U2U and the Swedish affiliates, namely, ASSR, Vardfordbundet, ST, Vision and Kommunal.

“Migration affects all countries and labour markets. As trade unions, we need to be engaged in solutions that don’t put workers in the race to the bottom, solutions that are based on human and trade union rights,” says Britta Lejon, President of ST, the biggest civil service union in Sweden.

Sineva Ribeiro, President of Vårdförbundet (Swedish Association of Health Professionals), adds, “We share a common goal of ensuring the human right to health care for all. What we have seen in our visit to the camp was unacceptable.” 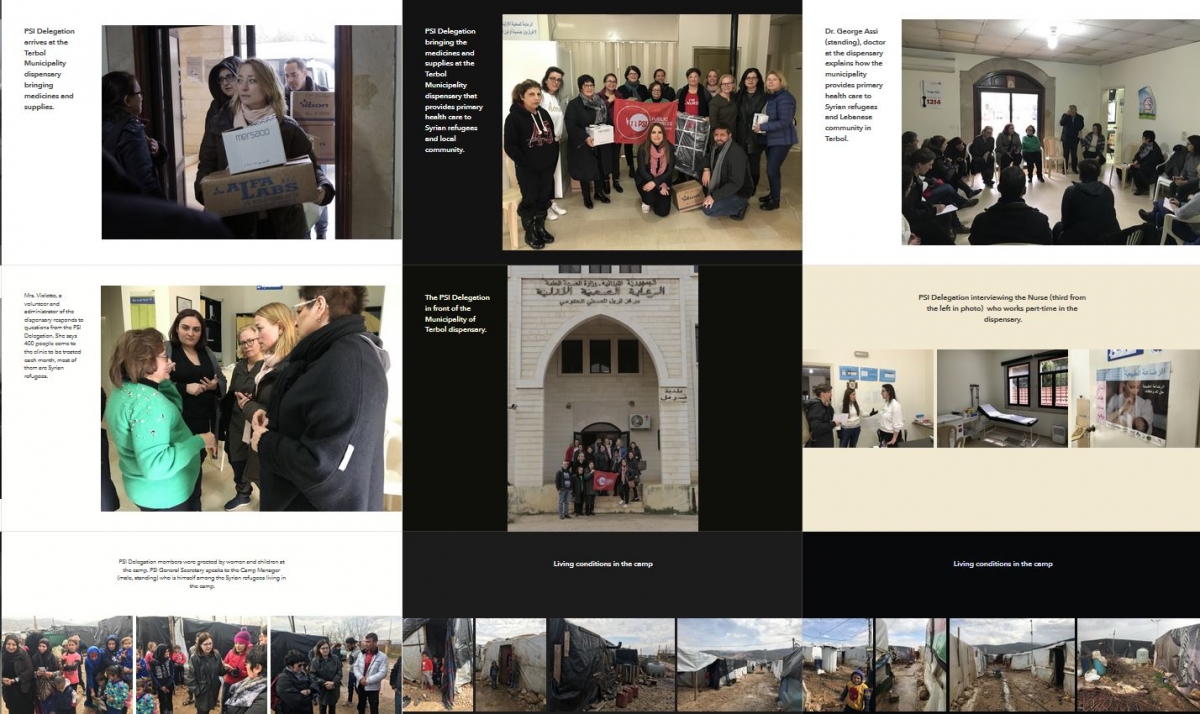 Refugee camp in the Bekaa Valley

The team of PSI Swedish and Lebanese union representatives led by Pavanelli visited an informal camp for Syrian refugees in Terbol municipality in the Bekaa Valley, where around 2,500 Syrian refugees live in inhumane conditions.

Tents were made of wood scraps and tarpaulin, with poor sanitation and a dysfunctioning sewage system. With snow and floods in winter, living conditions were hard and children, who were a majority of the inhabitants in the camp, walk and play around in the mud. Though Syrian refugee children can go to the public school in Terbol, only a few of them are actually in school due to poverty, distance and living conditions. Instead of going to school, most older children work in the fields earning $2 a day. Incidence of early child marriage among girl refugees is commonly used as a way out of poverty.

Terbol municipality runs a dispensary, where refugees and locals are able to access primary health care, including vaccinations for the children. However, the dispensary is severely underfunded, with health care staff working on part-time or voluntary basis. Patients have to pay around $6 per visit and will have to pay for medicines. The PSI team brought medicines and supplies during their visit to the dispensary.

“The municipality works hard to provide both refugees and the local population with basic services such as healthcare, water, electricity, sanitation and garbage collection, but its budget is simply not enough,” says Nemr Abu Msallem, an official of Terbol municipality.

“Lebanon has long been suffering from an economic crisis and the Syrian crisis has further added to the already overloaded and underfunded public services. All workers are in a difficult situation due to this economic strain,” says Bechara Asmar, President of the CGTL.

“We do not want to be pushed into this ‘’competition attitude’’ between migrants, refugees and local workers,” says Khalil Zeaiter, Secretary General of the Union of Workers of the Port of Beirut, a PSI affiliate. “The current economic and political crisis is pushing local workers to become racist and we reject this. Workers are faced with arbitrary dismissals, soaring unemployment and precarious work. We need the capacity to address this problematic situation, to defend workers’ rights for all and to shape public policy,” he adds.

“Neoliberal policies imposed over the last decades in many countries including Lebanon have been targeting public services, cutting funding, reducing staff and depriving access to these services. Without understanding the structural and root causes of injustice and inequality resulting from these neoliberal policies, it is easy to be misled by the far-right, racist and fascist groups who conveniently blame migrants and refugees for these problems,” says Pavanelli.

“It is in these times that we need to strengthen workers’ unity, build stronger alliances within the wider trade union movement and civil society, and to address these falsehoods and contradictions, in order to defend human rights for all, access to public services and promote inclusive societies,” concludes Pavanelli.

Click here to access voice and video files, background documents and photos of the mission to Lebanon