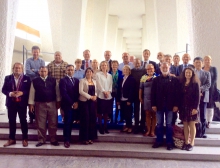 On 16 September 2015, Public Services International and UNI Global Union held a strategy meeting at the International Labour Organisation in Geneva to build co-operation between the global union federations to fight corruption and secure whistleblower protection at work.

Commenting on the need to combat corruption, PSI General Secretary Rosa Pavanelli, said: “Fighting corruption is firmly embedded in the 2030 Agenda and Sustainable Development Goals that were adopted on 25 September 2015. Corruption undermines the public funding of public services, transparency and credibility of government, ultimately undermining democratic institutions. Corruption will never be addressed seriously if we cannot protect those who stand up against exploitation, crime and capture of the state. There is an important role here for social partners and the ILO.”

Commenting on the call for whistleblower protection, UNI General Secretary Philip Jennings, said: “One of the lessons of the global financial crisis was that decision makers must ensure the right of workers to whistleblow as an integral feature in a new era of social responsibility. UNI’s Professionals & Managers’ Group and UNI’s Finance Sector Conference in October 2015 will continue to make the case for competency, honesty and transparency in all social, economic and environmental practices. Without these we will not realise the reforms that we need for sustainable global justice, peace and security.”

A decade of global union campaigning

Combatting corruption has been a priority for PSI since its November 2012 World Congress which built on the work done by PSI affiliates across the globe over the previous decade. PSI’s focus has been on challenging tax havens and secretive deals between governments and multinationals which often provide cover for corrupt practice which lead to billions of dollars in taxes not being paid into state budgets. PSI has argued that a key alternative to crushing austerity and cuts in public spending is through a serious effort to fight corruption.

However, far from blaming workers operating without adequate protection, the fact is that any finance sector employee who spoke out in the public interest risked being left largely unprotected by the law against personal retributions, a loss of their livelihoods, and their future employment prospects. It was this catch-22 for financial sector workers which gave UNI Global Union an added sense of urgency to press the issue of whistleblower protection and the appraisal of statutory institutions of whistleblowing in the realm of professional ethics and collectively bargained Corporate Social Responsibility policies.

Since 2010, affiliates of UNI Global Union’s Finance Sector and the Professionals and Managers’ Group have been mapping legal safeguards of workers who expose wrongdoing at work. UNI P&M pressed for the protection of whistleblowers to be a priority issue because of its importance to P&M workers across all UNI sectors at a time of major technological change and digitalisation at work. It also argued for the right to bargain for protection clauses into global agreements. Meanwhile, UNI Finance Sector successfully lobbied the European Commission to get whistleblower safeguards adopted into compulsory financial regulations.

Since 2012, both UNI and PSI have both called for the creation of an international labour standard for the protection of workers and has engaged the ILO on this issue. These calls were reinforced at UNI’s World Congress in December 2014 where affiliates adopted the ‘Including You in taking back our economies’ resolution that ‘without proper regulation, checks-and-balances and reform, the global economy will continue to be fragile and working peoples’ lives will continue to be vulnerable. UNI Global Union will fight to protect whistleblowers for greater transparency and involve employees in supervision processes.’

At the UNI–PSI strategy meeting on 16 September, participants shared their trade union experiences of the personal, professional and public consequences of weak anti-corruption policies and inadequate protection for whistleblowers. Participants described how a myriad of formal and informal arrangements existed in different companies and countries. Some policies were collectively bargained, others were voluntary arrangements, while others were set out using legislative instruments. However, participants noted that the policies often failed to address both the public and private sectors, just as there were inadequate safeguards to address concern issues of labour protection.

Participants concluded with a call for a coherent international labour standard to protect whistleblowers in the public and the private sectors. An international standard was seen to be able to offer a harmonizing effect; promoting policy coherence and stressing the importance of collective bargaining in this context. Participants also called for labour protection of whistleblowers to safeguard their employment status, as well as current and future income.

To build on the co-operation and campaign for whistleblower protection, UNI Global Union and PSI is setting up a working group to develop a coordinated work plan with joint actions to engage the ILO; global and national trade union organisations; employers and civil society partners.

A joint strategy document will be developed for discussion at regional and global level, and case studies of the best and worst practices of whistleblower protections will be gathered for further discussions with the ILO and the ITUC.