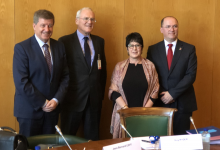 The signature marks the completion of the renegotiation process of the earlier 2009 global framework agreement (GFA) with EDF Group.  The union negotiating team was composed of 2 representatives from the 11 national trade union federations with direct membership in EDF workplaces and from global unions PSI and IndustriAll. The renegotiation started in 2017 with an assessment of the 12 years of the previous agreement. It involved four full negotiating sessions and two bilateral talks between the company and global union federations. A joint text was agreed on 23 March 2018.

Rosa Pavanelli said: “With this renewed global framework agreement, EDF Group commits itself to uphold a high standard of human and labour rights wherever it operates. The next step is to effectively implement these commitments on the shop floor and secure local management ownership of the agreement, in cooperation with trade union representatives. This renegotiated text marks the first corporate commitment to country-by-country tax reporting in a global framework agreement. It also includes provisions for trade union involvement in the company’s programmes to ensure the protection of whistle blowers. We will closely and relentlessly scrutinize the effective implementation and follow-up of all commitments in this agreement, working with our global membership and allies”.

Valter Sanches, general secretary of IndustriALL Global Union explained:"The negotiation process of the global framework agreement with EDF was done in a frank and transparent manner. The GFA is an achievement where all parties have been involved, resulting in clear commitments on supply chain management, as well as active implementation and monitoring of the global agreement. Now we need to put it into action and ensure that the GFA is beneficial to all parties".

Jean-Bernard Lévy, CEO from EDF, announced after signing the agreement: "I am sure that our CSR strategy is a key factor in the EDF Group’s sustainable performance, as demonstrated by this agreement. The Group is reiterating its commitment to the balanced development of its activities around the world. Human rights, diversity, health and safety, skills development and social protection for the company’s employees and subcontractors form the foundations of this commitment".

The renewed GFA automatically applies to all EDF operations worldwide, covering over 160,000 workers in 24 countries. It substantially improves earlier provisions for workers and trade unions, including the following:

This renegotiated text also becomes one the first GFAs to include provisions for trade union involvement in a company’s whistle-blower protection programmes and in the design and implementation of the supply chain responsibility provisions mandated to comply with the 2017 French law on the “duty of vigilance”. It also includes references to the ILO MNE Declaration as per 2017 revision and a commitment to country-by-country tax reporting.

The GFA is an opportunity for PSI affiliates to collectively take full advantage of such provisions to build power, to defend members’ rights and conditions, while promoting an ethos of quality public services.  PSI encourages affiliates with direct membership in EDF operations and subsidiaries worldwide to work with PSI and its regions to ensure that the content of this agreement is upheld in EDF workplaces.

The text of the new agreement will be disclosed on 20 June 2018, when it will be additionally signed by all national federations who took part in the renegotiation.