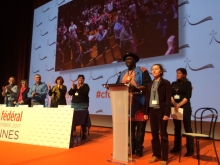 The 33rd Federal Congress of the French health sector affiliate, CFDT Santé Sociaux, was held on 21-24 November 2017 at Vannes, in the North-West of the country. It was a moment for deliberation between the leadership and militants of the union towards building stronger union and its perspective that health workers constitute invaluable assets for the delivery of quality health care services.

The Congress was also very significant, marking a change in leadership. After almost a decade of meritorious service, Nathalie Canieux, who was Secretary General from May 2009, did not seek another term in office. Eve Rescanieres, who until then had been a National Secretary, took up the mantle as new General Secretary.

Presenting PSI’s solidarity message to the Congress, Baba Aye, the Health and Social Services Officer noted that public health systems across the world have suffered over the last three decades of “neoliberal policies that put profit over people”.

PSI, he informed, has consistently defended universal access to quality public services as an essential means for inclusive development and social justice, since its formation in 1907. People Over Profit, as the theme of the PSI 30th World Congress and 2018-2022 Programme of Action, is a reiteration of this tradition.

“The current state of the world is not ordained. We, as human beings make the world we live in. It is true that the 1% who have remoulded the world in the image of their profit-driven monstrosity have power. But ultimately, power belongs to the people.”

It is through concerted struggle for People Over Profit, that we can roll back the hegemony of neoliberal globalisation.