Privatisation in education and human rights 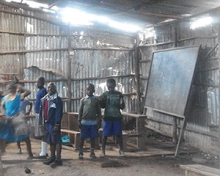 Everline Aketch, NUEI, Uganda, and a member of the PSI Education Support and Cultural Workers’ coordinating committee, represented PSI at a global meeting on privatization in education and human rights, held in Nairobi, Kenya, 5-11 September 2016.

Other participants were from trade unions and civil society organisations (CSOs) that deal with human rights, especially in terms of access to basic education. It was observed that low-fee private schools were rapidly emerging in a number of African countries despite the fact that they undermine the provision of quality of education while maximizing profits.

The UN Special rapporteur on the Right to Education observed that there was gap in education access both at primary and lower secondary despite the provisions of the International Covenant on Economic and Social Cultural rights on the rights of a child especially in regard to access to free basic education (Article 28 and 29). She pledged to support the initiative of CSOs on provision of quality free basic education.

Participants visited a slum school and were able to experience the conditions in which the children in the slums study and go to school. One room was used to teach pupils from year one to year eight, using sacks as partitions to separate the groups. In some instances, one teacher was teaching four classes simultaneously. The slum school is a low-fee school that operates on the model of Bridge International Academy, employing unqualified teachers.

The majority of primary schools visited were categorized as informal schools, and yet while pupils reached year eight, they would transfer to formal school and sit for national examinations. Bridge International Academy was one of the schools visited and by the end of the trip members agreed that Bridge schools should not be allowed to operate because they offer sub-standard education at a price that most families cannot afford. Even though they claim to be low-fee, families have to pay for uniform in addition to the fees. It was also agreed that the Kenyan government should be asked to build more public schools since the operation of substandard informal schools resulted from a lack of public schools in the slum area that has more than 500,000 inhabitants.

The participants at the meeting discussed proposed guiding principles, and agreed that governments need to be pushed to commit more funds to providing public schools and reduce the use of taxpayers’ money towards PPPs. They recommended a gradual phase-out of governments’ support to PPPs. They agreed that global bodies must counter the promotion of PPPs as they represent a threat to the provision of quality public services. The guiding principles were expected to be finalized within one year.

A number of priority areas were identified in terms of areas for advocacy and collaboration, including the reduction of private actors in provision of basic education, and the provision of quality education. It was planned that the next meeting will take place in the AP region in 2017.