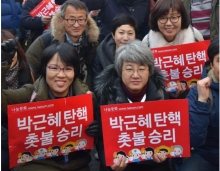 The impeachment of Park Geun-hye, now former President of South Korea, is not only the culmination of a political scandal involving corruption. It is also a victory built by the trade union movement which, relentless, denounced for years the abuses against workers committed by her regime.

On 10 March, a unanimous 8–0 decision taken by the Constitutional Court of South Korea removed Park from office, accepting an indicative vote for her impeachment given, on 9 December 2016, by 234 out of 300 National Assembly members.

Accordingly to the Constitution, South Korea must now elect a new president within 60 days.

“We welcome the news that a regime which systematically abused workers and trade union's rights has, at last, fallen. The allegations against Park Geun-hye confirm that her government, which criminalized trade unions, was actually on the payroll of Korean multinational corporates. This is a great success for the union movement, which never gave up and continued fighting despite all the odds intrinsic to authoritarian regimes, such as persecutions and arbitrary arrests of union leaders. We expect that the outcome of the coming election, on 9 May, will represent the beginning of a new more democratic Korea,” says PSI’s General Secretary Rosa Pavanelli.

Today’s decision made at the constitutional court resulted from the candlelight vigils and persistent struggles to create a new democratic nation in which the 99% has the right to pursue happiness. Such struggles created this victorious civic revolution, which will be long celebrated in Korea’s history. We have braved the freezing cold in the middle of winter and filled the square with victorious voices for democracy and justice. Now, a new gate of hope has swung wide-open for people. Korea is ready to march towards a new future. Finally, spring has arrived with hope.

KHMU President Yoo Ji-hyun believes that such a victory brings incentive to find out the truth about healthcare scandals, remove harmful practices in the healthcare sector, and strengthen the public nature of healthcare services.

“Today’s victory is the victory of the grand civic revolution and of truth and democracy. I deeply thank all of our comrades, brothers and sisters of trade unions worldwide for their warm and support for our struggles against injustice,” said Yoo Ji-hyun.

It is believed that over the past four months approximately 156 million people gathered at the weekend candlelight vigils throughout South Korea.

See below all the actions PSI took alongside with other Global Unions since 2013 – year that Park Geun-hye became South Korea’s president:

As Korean workers fight for their rights, Swiss do business with Korean President 18/08/2014

Deregulation of transport safety can be lethal, say Korean unions 03/04/2015

The struggle of precarious school workers in Korea 04/08/2015

Urgent action: solidarity with Vice President of KPTU in Korea 01/07/2016

KHMU resolves to struggle for better health care and the candlelight revolution in Korea, at annual Congress 03/03/2017