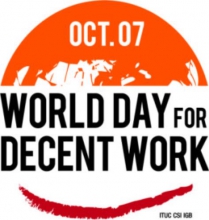 On 7 October we celebrate the World Day for Decent Work.

Quality public services can only be delivered by workers whose rights are fully respected. For the health workers in Guinea, Liberia and Sierra Leone this is the harsh reality as they are struggling to deliver adequate health services in unacceptable conditions. PSI condemns the preventable deaths of hundreds of healthcare workers, killed on the job by Ebola because they did not have the necessary tools and equipment.

From Guatemala to Cameroun to South Korea, governments violate workers’ and trade union rights. The criminalization of social conflicts and increasing violence against protesters is a reality from North to South, compounded by an international campaign against the right to strike – led by the Employers’ group at the ILO, and funded by multinational companies

Many governments have already introduced the worst private-sector practices in public sector employment conditions and today 50% of public service workers are in precarious employment, a majority of whom are women.

PSI calls on all governments to ensure that the United Nations’ Post 2015 Development agenda will stop giving disproportionate attention to private-public partnerships without clear benefits or proposed regulation. Instead, universal access to public services for social development should be incorporated.

We want to see a growing share of wages in GDP as a target, recognition of social dialogue and direct references to international labour standards, including ILO recommendation 202 on the social protection floor. While the debate on the post 2015 agenda continues, many reforms are being negotiated, such as through free trade agreements that will have a massive impact on future regulation in the public interest and workers’ rights.

Decent work for all can be a reality in the 21st Century but we need to fight for a radical policy change that is people-oriented and human rights based. Now more than ever, trade union unity and solidarity are the key elements for the success of our actions – together workers can make a difference!