No means no! Civil society and unions stand with Wallonia in rejecting CETA 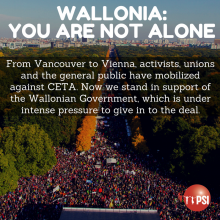 The Belgian region of Wallonia is standing strong against attempts by the EU and Canada to push through the signing of the CETA deal, despite mass mobilization and strong public opposition to the regressive trade pact.

After a weekend of increasingly desperate diplomatic advances, the EU issued a Monday deadline to the Wallonian parliament to approve the deal, in an attempt to pressure local leaders to give in. However, speaking with reporters, Wallonian Parliamentary President Andre Antoine said “ultimatums and threats are not part of democracy,” and reaffirmed his region's rejection of the deal.

The Belgian Prime Minister Charles Michel confirmed that the decision by Wallonia and the Brussels City Government meant that  Belgium is “not in a position to sign CETA.” EU rules state that trade deals need to be supported unanimously by all member-states and without Belgium's consent, CETA will not pass.

“David defeated Goliath! Wallonia is showing that defending democracy and people’s interest is the only way to win. And Wallonia is not alone - we have seen public outrage at these corporate sponsored deals spread like wildfire, with unions and activists from Vancouver to Vienna calling for a halt to the talks. The EU needs to respect democracy and accept the Wallonian decision, not try and force the deal through at all costs.”

These developments make the signing of CETA increasingly unlikely. On Friday, Canadian Trade Minister Chrystia Freeland left the last minute discussions exasperated, telling reporters “I think it’s impossible,” and the planned ceremony with Canadian Prime Minister Justin Trudeau on Thursday is looking very unlikely.  Media outlets across the political spectrum are writing off the talks as “in crisis” and “on the verge of collapse” with the New York Times saying the apparent death of the deal shows “the extent to which trade has become politically radioactive around much of the globe.”

Public Services International and many of our affiliated unions have been strongly involved in the campaign against CETA, TTIP and TISA and stand with Wallonia and other communities and regions pushing back against regressive trade deals which promote corporate profits over public interest! General Secretary Rosa Pavanelli wrote a letter of support to the Wallonian President last week and a strong coalition of Canadian unions, including many PSI affilaites has called for their government to reject the deal.