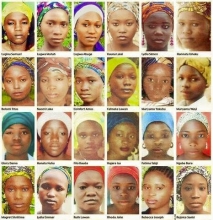 The Nigerian Labour Congress (NLC), the umbrella organisation for trade unions in Nigeria, joined hands from 8-14 April 2016 during the global week of action to demand for the safe return of the abducted Chibok school girls. Public Services International’s eight Nigerian unions are affiliated to the NLC.

In a press release published on 13 April, the NLC recalls that two years ago, these girls were stolen from their beds overnight in a secondary school dormitory in Chibok, Borno Sate in northern Nigeria by Boko Haram terrorists. Out of the 276 school girls abducted in April 2014, 57 managed to escape. 219 are still missing today. As many as 17 of their parents have reportedly lost their lives as a results of the trauma and many are agonizing daily.

“An injury to these girls is certainly an injury to us all,” writes NLC President Ayuba Wabba in the press release. “It is not over until these girls are liberated from the clutches of criminal abductors.”

The NLC calls on the Nigerian government to intensify the security measures to liberate these girls. The trade union organisation acknowledges the efforts of the current Buhari administration to smash out the dens of the Boko Haram terrorist but states that only the return of the Chibok girls will convince the world that the war on terror in Nigeria is not just a war to reclaim territories but to regain lives.

The NLC President says, “To us in the labour movement, 219 missing girls are the future workers, mothers and not statistics. The received wisdom says that if you educate a girl child, you educate a whole community. Those who abduct 219 girls out of school have definitely criminally abducted communities from future doctors, nurses and leaders. We must therefore join forces with the forces in progress and development worldwide to join forces in the liberation of our beloved girls of Chibok.”

Through this statement, the NLC is calling on its 50 affiliated industrial unions and 6 million members in the country to join the weeklong activities under the theme #HopeEndures to rescue the girls. The demand of the Chibok girls is also part of the planned day of protest on the state of the nation. The NLC salutes the leadership of #BringBackOurGirls (BBOG) for keeping the memories of these girls alive.

Boko Haram, is an extremist Islamic sect in Nigeria that has created havoc across the north of the country and in the capital, Abuja. They promote Islam in a version that makes it forbidden for Muslims to participate in any political or social activity associated with western activity. Boko Haram continues to be a threat to our human security. Although they have dropped off from the international headlines and eye somewhere last year, they still exist and operate.