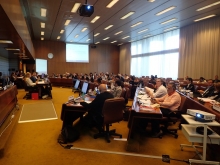 Unions from every PSI region successfully negotiated new ILO guidelines to ensure decent work in public emergency services (PES). Workers, employers and governments adopted the new guidelines on 20 April 2018, which will be presented to the November 2018 ILO Governing Body for approval.

Governments and employers understand and respect the sacrifices demanded of PES workers and agreed protections for workers.  First and foremost are the Fundamental Principles and Rights at Work (paras 25 & 26), which means that PES workers have the right to organise and form unions and to bargain terms and conditions.  Further, the guidelines indicate that ‘states of emergency’ should not be used as a pretext to curtail these rights (para 102).

PES workers also have the right to refuse unsafe work; the right to adequate tools and training, such as field exercises – including with the community.  Given that many PES are deemed ‘essential services’, workers who are refused the right to strike must benefit from impartial collective dispute resolution mechanisms (para 105).  This is an implicit recognition of the right to strike, which has been under attack in the ILO for some years.

The definition of PES workers is broader than just first responders of fire, police, ambulance and emergency medical technicians.  It now includes workers in utilities, local and regional governments, health and social services.  They all deserve the extra training and protections for when they will be involved in PES, even if this is not their primary function.

We succeeded in bringing in detailed text on personal protective equipment (PPE), which is the ultimate barrier preventing injury or death to PES workers – when all other methods have failed (section D).  PES employers must provide the appropriate PPE according to risk, and maintain this equipment, at no cost to PES workers.

The guidelines set a new standard for volunteers in PES :  even though not PES employees, they are workers and must benefit from fundamental principles and rights at work, and ‘no volunteer should be asked to carry out any work or activity that is not commensurate with the training they have received and for which they have been assessed as competent. (Para 122). Further, ‘[t]he use of volunteers should not impair the coordination of PES, substitute PES workers, or undermine the wages or working conditions of other PES workers, or be used to justify the understaffing or underfunding of PES.’

The PES guidelines acknowledge the importance of social dialogue mechanisms in many areas of decision-making – decisions are more solid if PES workers and their unions are involved from the start.

The guidelines should be used by unions to :