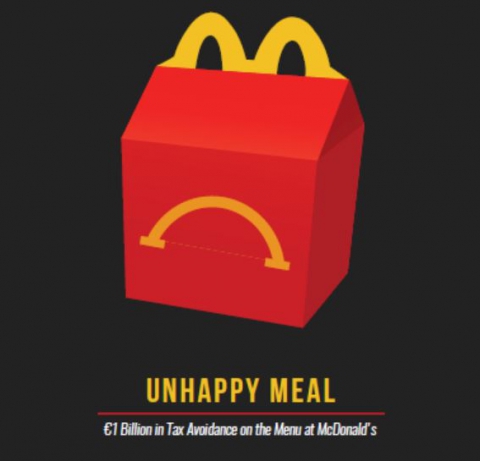 A coalition of European and American trade unions, joined by the antipoverty campaign group War on Want, has unveiled a report about McDonald’s deliberate avoidance of over 1 billion Euros in corporate tax over the five-year period, 2009 – 2013.

The report outlines the tax strategy adopted by McDonald’s and its impact on tax collection in countries such as France, Italy, Spain and the UK. The practice is based on moving the European headquarters from the UK to Switzerland and using intra-group royalty payments channelled through a Luxembourg based subsidiary with a Swiss Branch.

The report shows that the Luxembourg based structure, which employs 13 people, registered a cumulative revenue of 3.7 billion Euro between 2009 – 2013, on which it reported 16 million euro in tax.

“Companies such as McDonald’s are mocking the European population when they can so easily pay their workers’ low wages and cream off the profits,” said Rosa Pavanelli, PSI General Secretary.

“These arrangements are a scandal for our governments when they are claiming that they do not have the taxes to pay for basic public services,” said Pavanelli.

“Instead of forcing austerity on working people, the European Commission should be ensuring it collects taxes from the people who are making massive profits”.

“Who can be surprised that corporate profits and inequality grow while unemployment rises and public services are cut, when we now know that companies like McDonald’s shift their profits out of the countries that make them wealthy. Everyone benefits when companies pay tax where they make the profits,” she said.

McDonald’s is the largest fast food company in Europe, with 7850 stores and over 20 billion in sales in 2013. McDonald’s European division accounts for almost 40 percent of the companies operating income.