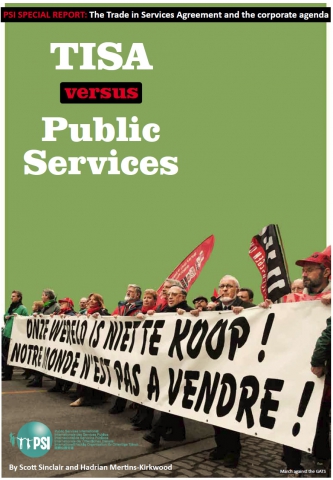 A new report by Public Services International (PSI) warns that governments are planning to take the world on a liberalisation spree on a scale never seen before. The report comes as governments are resuming multilateral talks on the Trade in Services Agreement (TISA) at a closed-door meeting in Geneva, starting 28 April 2014. Under the name the ´Really Good Friends of Services,’ a group of 50 countries— representing an estimated 70 per cent share of the world’s trade in services—are negotiating the TISA.

According to the new report ‘TISA versus Public Services,’ this massive trade deal will put public healthcare, broadcasting, water, transport and other services at risk. The proposed deal could make it impossible for future governments to restore public services to public control, even in cases where private service delivery has failed. It would also restrict a government’s ability to regulate key sectors including financial, energy, telecommunications and cross-border data flows.

The report says that, under the deal, governments would lose the right to require labour market surveys to ensure that no local workers are available to perform the necessary work before engaging temporary foreign workers.

PSI and civil society allies are mobilising to protest today against the secret negotiations, including with actions in Switzerland, Australia, the United Kingdom, Japan, India, the Netherlands, Austria, Belgium, Brazil, Canada, the United States, Colombia, Mexico, Panama and Costa Rica.

Rosa Pavanelli, General Secretary of Public Services International (PSI), says: “This is an attempt to secretly extend the most damaging parts of the infamous GATS agreement that previously sparked global protests. The aim of public services should not be to make profits for large multinational corporations.  Ensuring that failed privatisations can never be reversed is free market ideology gone mad.”

Pavanelli emphasizes that, “It is fundamentally undemocratic for parliaments to permanently hand over the people’s democratic mandate to multinational companies.”

Users of public services and public service workers are demanding the release of more information on this sweeping trade deal, and assurance that it will not affect provision of any public services. They are also delivering to government leaders a protest letter signed by over 350 organisations from over 115 countries.

In Brussels, Jan Willem Goudrian, Deputy General Secretary of the European Federation of Public Service Unions (EPSU), says: “This agreement will bind future governments, regardless of who wins elections and what the courts say. If the European Commission has nothing to hide they must immediately release full details of these negotiations.”

In London, Dave Prentis, General Secretary of UNISON, comments on people’s experience in the United Kingdom: “Privatisations of the National Health Service and the London Underground transit system have been costly disasters. Tying our government’s hands to prevent us from dealing with failed privatisations will give business the green light to take us all for an expensive ride.”

The report on TISA was written by Scott Sinclair, Canadian Centre for Policy Alternatives, and Hadrian Mertins-Kirkwood, Institute of Political Economy, Carleton University.