Mass Rally in Turkey: “We will not be slaves of subcontractors!”

Stop slavery; No to subcontracting, disorganizing and deregulating!

This was the main slogan of the rally held on 15th February 2014 in Ankara with the participation of over 50 thousand workers members of unions affiliated to the Confederation of Trade Unions of Turkey (TÜRK-İŞ). Members of the Turkish Union of Road Construction and Building Workers (YOL-İŞ) which led the action gave colour to the Sıhhiye Square of Ankara. Over 20 thousand YOL-İŞ members from 81 different cities in the area wore their orange hats and aprons. 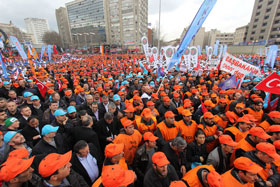 More than 10 thousand YOL-İŞ members working for subcontracting companies in workplaces of the Directorate of Highways filled the square on that day. 28 months have passed since the decision taken by the Supreme Court in 2011 acknowledging the illegal outsourcing relationship between the employer and the subcontractors. According to this ruling, the workers mentioned should have been respected as the employees of the General Directorate of Highways from the beginning of their first contracts, and they should have been included in the current collective bargaining agreement. But none of the relevant ministries have taken positive steps yet. The Crowds shouted: “We will not be slaves of subcontractors”. 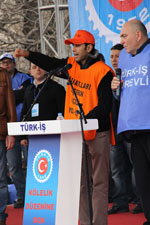 On the day of the rally, YOL-İŞ member Mustafa Dağtekin gave a voice to the demands of the contract workers with these words: “We are as many as the ants in soil, as fishes in the water, as birds in the air. We are millions united within our unions. This is our power. We, as the construction workers who are breaking the unbridgeable mountains, passing the impassable barriers, claim our right to unionize and to bargain collectively which is stipulated in our Constitution, in universal law and in acquired court decisions. We've been law abiding and patient so far. Now, we are urging those who are responsible towards us to obey the same law. Do what is necessary to be done!”

YOL-İŞ members working in 28 city’s Special Provincial Administrations, of which the legal entity will be terminated and transferred to the Metropolitan Municipalities, were also in Ankara on February 15, for their righteous struggle. Due to the law approved last year, almost 11 thousand YOL-İŞ members which are specialized in construction with a unique education and experience on this sector will be put under the order of municipalities and other public enterprises at the date of March 30, and therefore they will be forced to work outside of their expertise. 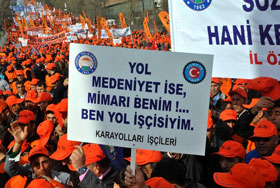 As well as in the process of parliament negotiations, today, YOL-İŞ is still putting up a fight with the support of its members, for the protection of qualified labour force’s employment in the profession of construction, by advocating the need for establishment of building and construction units within municipalities.

YOL-İŞ Executive Board stated during the rally that the ongoing struggle will continue until the rights of contract workers that were acquired by court decision be respected and the righteous demands of workers of Special Provincial Administrations be implemented.