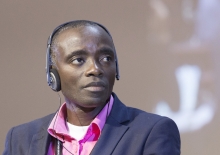 PSI: George, in your opinion, how do you explain the situation of public services in Liberia today?

GPW: Ever since the civil war in Liberia, the country`s infrastructures have been struggling to recover.  Health, education, roads, energy, water, agriculture, and so on have all been badly damaged by 14 years of senseless war!  Those whose ideology was to seize power for self-aggrandizement in the under-developed West African nation – who waged a war which took 250,000 lives- have been the ones elected to power since the war ended in 2003, until recently.

PSI: But can you see any improvements on the horizon?

GPW: International donors, and bilateral partners have been making frantic efforts to help our war-ravaged nation recover its basic social services, and improve the livelihood of its citizens who are one of the world’s poorest people. Despite the donors’ help, particularly during the last 12 years, upgraded social services still fall short of standard levels. The former Vice President, Amb. Joseph Boikai summed it up in a few words, “we (the government) had many opportunities, but we squandered them all.”

PSI: Can you tell us about some of the concrete problems that the health sector in Liberia is facing?

GPW: In the face of squandered opportunities lies a broken health system in urgent need of resuscitation. A system in which nearly every patient in need of specialised treatment is referred abroad due to lack of specialists and equipment, if they can afford it, or left to their own devices if they cannot afford it. A system which could not respond to Ebola, meningitis, and is overwhelmed by malaria and scabies! A system without adequate diagnostic equipment, persistently out of medications for patients, and reagents for laboratory investigations. A system with insufficient beds for the number of admissions on a daily basis, without running water and usually out of electricity. A system with no refined ambulance system and constantly short of protective equipment for healthcare workers. The system in which health workers have been treated as disposable goods, had no inputs in the decisions that affected them with government failing to consider our views, and where we would go to work only to contract diseases and were left alone to die! The memories of the Ebola crisis in 2014 is a nightmare that we, Liberian health workers, will live with for the rest of our lives.

PSI: But we have read reports that the Liberian government has developed an investment plan for “Building a Resilient Health System.” Do you have any comments about that?

GPW: The reality I have described certainly cannot allow us to refer to the Liberian Health System as “resilient” or anything near to that.  It goes without saying then that the “Building a Resilient Health Sector” policy which has been over-emphasized was merely a show off. There were some triages built around many facilities after the Ebola crisis, some level of trainings carried out for health workers, and some left over PPEs from the Ebola crisis. But these are far less than the minimum requirement for a functional Health Care Delivery System. The new administration must see these challenges as urgent and must take the necessary steps to curb the situation and start the real “Building of a Resilient Health System.”

PSI: So, what do you think the future brings?

GPW: We acknowledge that the George Weah-led government has inherited a broken health system, but the workers’ unions believe that, if the sector is prioritised and given political will, together with the courage to fight corruption, and in collaboration with its partners, the system can definitely be resuscitated. Thankfully, the Weah administration, though too early to grade, seems more willing to listen to the workers’ concerns.

This article is an extract from the “Right to Health” newsletter issue 04 (April/May 2018). Subscribe to the newsletter. Send us your stories.