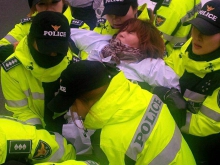 Striking elementary school teachers have been injured during a violent police raid in South Korea on 17 February, just a day before the Lunar New Year holiday.

The group of women, all of them after-school teachers, were on their sixth day of sit-in protest and strike after bargaining with the authorities broke down.

The women, members of KCTU-KPTU Education Workers Solidarity Division, had chained themselves together as part of their protest. On 17 February at 7.30 am, the police intervened, climbing on top of the protestors to cut the chains and then dragged them out forcibly. Some of the women were injured during the police intervention.

As part of its job creation policy, the Park Gyun-hye administration has rapidly increased the number of after-school teachers at elementary schools. But the workers are faced with extremely short-term contracts (15 hours or less), very low wages and job insecurity.

This struggle in North Gyoengsan Province highlights the problems with the Park government's expansion of badly paid, insecure part-time jobs, aimed at women, and the plight of after-school teachers in the country.

This is not the first action by Korean education support workers. They held rallies and a one-day strike in November 2014, following the government's reneging on promises to improve their conditions.

Since the beginning of the Park Geun-hye presidency in 2013, there has been no respite to the attacks on trade unions. PSI supports Korean workers’ struggles across the whole of the public sector.