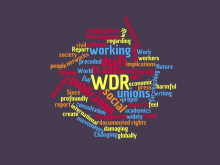 The International Trade Union Confederation, six global union federations, including PSI and 75 organizations are calling on the World Bank to re-write the draft World Development Report 2019 to uphold decent work and inequality reduction. The Bank’s Board of Directors will discuss the draft on 12 July.

A letter to the World Bank, calling for the World Development Report to be rewritten to promote decent work and inequality reduction

We are writing to you regarding the World Development Report 2019: The Changing Nature of Work (WDR). As civil society organisations, social movements and trade unions advocating for workers’ rights, we feel the recommendations of the WDR 2019 report – as they stand – will create harmful consequences for working people globally, with far-reaching damaging economic and social implications. We are thus profoundly disappointed that a full and proper period of consultation did not preceded the publication of the flagship report’s working draft.

Since its publication, the failings of the draft WDR have been widely documented among academics, trade unions, networks, national and the international press.

The draft version of the report puts forward a vision of work that involves extensive labour market deregulation, including lower or no minimum wages, flexible dismissal procedures, and zero-hours contracts. Further, the draft broadly overlooks power imbalances and the declining labour share in income, as well as failing to recognise the integral role of strong labour rights in creating resilient and prosperous economies as well as more equal societies.

Instead of setting out a concrete policy agenda to enhance workers’ security, legal protection, safety or social protection, the draft report accepts - and at times embraces - dangerous informality and insecurity in the labour market.

Much of the basis for an optimistic outlook on automation derives from the application of a historical perspective. This has faced significant criticism, not least because the rate and scale of automation is increasing and there is no guarantee that past trends will replicate themselves amid this new landscape.

So all-encompassing are the policy proposals that we do not believe they are compatible with the UN 2030 Agenda for Sustainable Development. This is especially true in relation to Goal 8 - ‘Promote inclusive and sustainable economic growth, employment and decent work for all’ and Goal 10, ‘Reduce inequality within and among countries.’ The move further seems to contradict the Bank’s twin corporate goals of eliminating extreme poverty by 2030 and promoting shared prosperity.

This outlook is contradictory to the considerable efforts made by international organisations such as the ILO to promote formalisation, and ignores the progress in some low income countries to deliver the benefits of formalisation, including legal protection of workers’ rights and access to social security. This divergence between the World Bank and the ILO is particularly pertinent as the ILO is set to celebrate its centenary with a Future of Work initiative next year, which will coincide with the WDR. Moreover, the optimistic outlook on automation flies in the face of a recent working paper by the International Monetary Fund, which clearly states the negative consequences of automation on generations of real wages and on levels of equality. Should the World Bank proceed with the draft WDR, there is a very real danger that it will become a lone wolf on the international landscape with regards to its take on the future of work.

If left unamended, the report threatens to radically alter the international labour market in a way that actively undermines the power of workers. Creating space for engagement and feedback is therefore critical.

The draft WDR 2019 report claims that, ‘The WDR team is engaging in strategic consultations with… international organizations, civil society organizations, and leading researchers.’ Despite promises to consult beginning in February 2018, consultation have mostly occurred after the ‘yellow cover’ draft of the WDR, when the key messages and most of the text of the report were already cemented. The list of engagements is insufficient in size, geographical scope and details. Of the eight consultation engagements listed to date, seven are based in Europe, creating an overwhelming Northern bias. Moreover, most engagements are not with civil society but with governments.

It seems beyond belief that the WDR team would proceed without a strong outreach effort to civil society and particularly the labour movement. The lack of willingness to listen to the concerns of a diverse range of representatives and experts is troubling, to say the least and calls into question the World Bank`s often-stated commitment to substantive consultation with civil society.

The limitations of a narrow, cherry-picked consultation approach are clear, and we are extremely disappointed that the World Bank has drafted a report on the changing nature of work without meaningful consultation with the trade unions or stakeholders. In light of that, and the concerns set out, we ask that the World Development Report 2019 be rewritten to instead promote decent work and inequality reduction, and that this be made clear when the report is presented to the Executive Board.

We look forward to your response.