Future driven: We too have a dream! 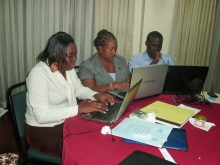 In November 2011, three trade union activists from St Lucia, Bermuda and Jamaica started what has become for them a long-term commitment to help build a stronger, sustainable public sector trade union movement in the Caribbean. With eyes focussed on the future, they recognised that in the absence of a vibrant, credible, public sector trade union movement – relevant to the 21st century - fighting the attacks on public services and public service sector workers would be even harder. They decided to stoke the fires and ignite a conversation on trade union renewal.

Janel Joseph, St Lucia National Workers Union (St Lucia NWU); Lloyquita Symonds, Bermuda Public Services Union (Bermuda PSU) and Shamir Brown, Jamaica Association of Local Government Officers (JALGO) are three of the trade unionists who completed work in the 2011-2013 FES-PSI cooperation project in the Caribbean. They are all elected to decision-making positions within their unions. Bro Shamir and Sis Janel are under 35 years.The project, “Influencing the debates on public policy and the development agenda in the Caribbean” sought, among other things, to contribute to the development of a knowledgeable and effective cadre of trade unionists able to lead and engage in debates at national, regional and international levels. The project work also sought to build within this cadre, the ability to contribute to national and Caribbean-wide debates on public sector finance and taxation; privatisation and outsourcing; precarious work; and environment and climate change issues. In 2012, the team decided to work together on what was supposed to be a brief position paper on trade union renewal.

They created a project blog. They interviewed members, talked with current leaders, conducted surveys and did lots of desk research. “We dug deep into trade union renewal and what it involves. And while we know that many started the conversation long before we did, it is not too late. We understand it is a process and things take time. But we must start now!”

Janel, Lloyquita and Shamir presented a summary of their findings and recommendations to the 2014 Caribbean SUBRAC. Welcoming the positive responses and encouragement, they are keen to see their work published in May and become widely available to trade unionists throughout the Caribbean and even further. And they want to get started!

“We thank FES and PSI for opening the door to a stimulating and exciting exercise that brought together three activists from the Bermuda PSU, JALGO  and the St Lucia NWU. Living and working in three different time zones we ‘met’ regularly, exchanged ideas, and built a camaraderie and friendship that will never die.”