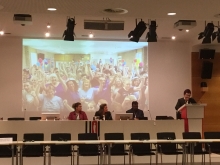 “Care work, both paid and unpaid, is at the heart of humanity and our societies.” From cradle to grave, as children, adults and elders, directly or indirectly, care work ensures our self-development and the reproduction of social life. More than three quarters of care givers are women and girls. And most of these provide unpaid care work in their families. This contributes significantly to the reinforcing of gender inequality.

There are currently 209 million care workers worldwide. This number is expected to rise to 475 million care jobs by 2030, because of changing family structures, increasing care dependency ratios, and changes in care needs. Increasingly ageing populations across the world, as well as an increase in women’s employment outside the home, means that fewer are delivering unpaid care work at home.

However, even this increase is not likely to be enough for the provision of quality social care. In 2015, 2.1 billion people needed care in the world. By 2030, the figure is expected to rise to 2.3 billion. These will include 2 billion children, 300 million elderly people and almost 190 million people with disabilities.

This means that women as mothers, sisters, daughters and relatives will still continue to bear the brunt of unpaid care work in their families. If the amount of labour time spent as unpaid care work were to be valued on an hourly wage basis, it would reach around US$11 trillion, which is 9% of the global GDP.

How can we avert this looming crisis? How can we ensure universal access to quality social care and ensure that millions of women and girls who would otherwise be trapped in the thankless rhythm of unpaid care work can realise their full potential in various fields of human endeavour?

We must take collective action.  Social care and care work have to be properly remunerated.  The proper value of care work has to be recognised and appreciated by authorities at municipal, regional and national levels in all countries. The ever-widening gender pay gap must be bridged, and this must be done with a sense of urgency. And the conditions under which care is delivered must be humane and mindful of the dignity of care givers.

Trade union organising is central to our taking collective action. PSI affiliates in the care sector will be supported to better defend their members and expand with membership drives that bring larger numbers of care givers into the trade union movement. With increasing union power, we will be better placed to influence policy on care work and care jobs.

Affiliates in all other sectors will also be encouraged to include issues such as childcare in their collective bargaining processes. For example, crèche services should be provided by employers for nursing mothers, but in many workplaces, they are not. In such cases, trade unions should add this very important item to their collective agreements.

That the time is now for us to take decisive action was driven home by 8,000 women in Glasgow in October. These members of two PSI affiliates (UNISON and GMB) in Scotland organised a 48-hour strike over gender-based pay discrimination in the public services. They included care workers, school staff, cleaners and caterers. And they spoke with one voice, after a 12-year tribunal battle and the repeated refusal of the Glasgow city council to act against gender-based pay discrimination.

It cannot be overemphasized that we need united action to win, in the struggle for decent care work and gender equality. Thus, PSI and its affiliates joined sisters and brothers from other trade unions across the world for a “Global Unions strategy meeting on the care economy” on 22–23 October in Nyon, Switzerland.

The meeting facilitated exchange of knowledge and experiences amongst the Global Unions and their affiliates on the challenges and opportunities for organising in the care sector. It also called for policy makers to consider care as a common good where investment should be made to ensure quality jobs as a basis for quality social care delivery.

Working in solidarity with other trade unions and the civil society movement, PSI and its affiliates will vigorously campaign for improvement in the wages and working conditions of care workers, and the provision of quality child care as key elements of our commitment to achieving gender equality by 2030.