Costa Rica: Government threat to the right to strike 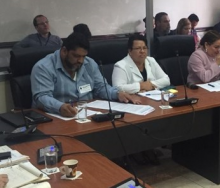 The National Association of Nursing Professionals (ANPE) in Chile is fighting new legislation which aims to abolish the right to strike. The action started when the union exposed that big business was receiving fiscal advantages while public services struggle. Now they are fighting against four bills removing the right to strike. Union officer María Esther Hernández Solís presents the union's position.

A bill on “Legal Security Regarding Strikes and Associated Procedures” is before the Costa Rican legislative assembly. The government aims to abolish the right to strike, if it is passed into law. The bill is backed by a president who has demonstrated his contempt for the people and a legislative assembly ready to remove hard-won labour rights, including the right to protest.

The background is a strike that began on 10 September and lasted 90 days. The strike was called against government proposals for fiscal consolidation and reducing the fiscal deficit. The only ones to lose out were public service workers, while big companies continue to evade and avoid their responsibility to pay tax.

This bias towards big business was unmasked when the Constitutional Court forced the finance ministry to present a list of companies that submitted tax returns indicating zero profit and therefore no tax liability.

It was equally alarming to find out that, in the period 2010-2014, the tax authorities did not examine the accounts of 76% of the big companies that declared net losses in two or more consecutive financial years. Despite these figures, the government is threatening the pay and working conditions of public service workers, who have their taxes deducted at source and thus no tax liabilities.

In the current legislative session, four bills under consideration all argue that protests should not affect the general public and all of them remove the right to strike. The bills arbitrarily classify a range of services as essential and are drafted in such a way as to make workers afraid to go on strike. They even go so far as to threaten the dissolution of individual unions.

Our union was called on to respond at the legislative assembly’s Economic Affairs Committee. Dr Rodrigo López García, our general secretary, and Dr Ma. Esther Hernández Solís, a member of our executive committee, emphatically expressed their opposition:

“We do not agree with this bill.

It removes the right to strike, which is a basic right for workers who feel under threat at any particular moment. It is contrary to the country's constitution and violates international instruments. It goes against decisions made by the Committee on Freedom of Association and the Committee of Experts on the Application of Conventions and Recommendations. It is therefore a regressive measure.

As for what is an essential public service, the authorities should specify what exactly is essential about the services in question and define the concept in relation to those particular services. The CCSS[1] provides an essential service but it is the administration’s negligence and not strikes that have paralysed the provision of specialist services, causing delays in operations and long waiting lists and forcing insured parties to make claims against the institution on the grounds of negligence. Workers have taken action on behalf of patients rather than to win benefits for themselves.”

The government should respect the social dialogue mechanism and promote decent work to curtail industrial conflict instead of resorting to strategies that undermine workers and trade union rights, even if this is with laws. Such a law, if passed, is unjust.  Our union is therefore ready to defend public service workers’ right to strike, including health workers in Costa Rica.