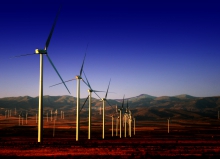 As the UN Climate Change Summit, COP20, in Lima, Peru, draws to an end, PSI highlights the special role of local and national government structures in developing, implementing and monitoring green policies.

“Public subsidies for private profits are not a solution,” says David Boys, PSI Deputy General Secretary.  After many years of decentralisation, and with the ongoing effects of the financial and economic crises, many local governments are starved of finance. The solution is more investment in public provision rather than more private business”

In particular, PSI believes that renewables must be part of any strategy for sustainable development.

“Many local authorities are using public finance and public management to build and operate renewables. It is leading to the creation of smaller, decentralised energy units.”

PSI does not support the “Green Economy” as currently defined which is more about neo-liberal solutions, such as “financialization” and commodification of nature and further privatisations than about accompanying climate policies and actions with the promotion of decent work opportunities arising from a low-emission society.

On COP20, PSI joins the International Trade Union Confederation (ITUC) in its proposals for a “Just Transition” for workers, contributing to protecting them in times of hardship, strengthening social dialogue, securing their rights, growing new sectors and promoting prosperity and sustainable development.

According to its 2012 World Congress, PSI is mandated to highlight the continuing challenge of finding a sustainable response to environmental degradation, the desperate need to preserve natural resources and address the question of unemployment. PSI also underlines the fact that the frightening frequency of natural disasters (that more and more have a man-made component), is due to the lack of public policy and adequate funding of public services which assume an important role at each stage – from disaster prevention to emergency response, recovery, and restoration. The physical and psychological strain placed on public services workers who carry out these tasks is immeasurable, and excessive reduction and privatisation of public services have exacerbated these issues.

Many PSI affiliated unions will be joining in the People’s Climate March in Lima on 10th December as will FENTAP General Secretary, Luis Isarra, recently targeted by the Peruvian government for his relentless activity in the labour, environmental and water movement.